Workers′ rights in Germany: Not everyone can go on strike | Germany | News and in-depth reporting from Berlin and beyond | DW | 11.10.2017

Different bosses, different rights: whether Germans are allowed to strike for better working conditions depends on if they work for a private employer, the church or the state. And that's just one of the rules. 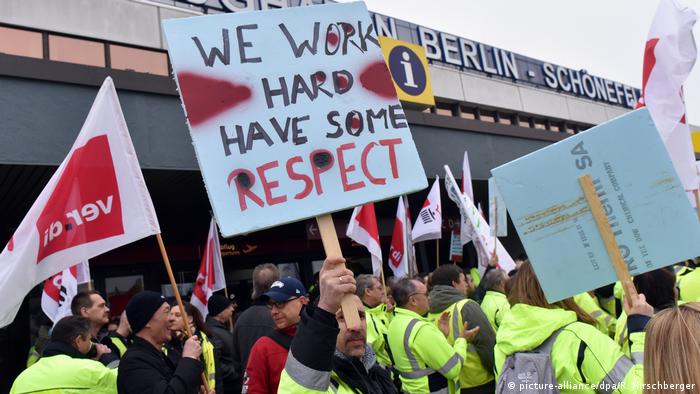 Nurses at the local hospital in Ottweiler, a small town in the western German state of Saarland, are on strike. Twenty of them stopped working on Wednesday to draw attention to the fact that they are constantly overworked. They are demanding that more nursing personnel be hired, so they can actually take breaks and not work an inhumane amount of overtime — a demand common to nurses across Germany.

The special thing about this strike: the hospital in Ottweiler is a Catholic institution, and the staff members at the Marienhaus Clinic do not have the same rights to strike as non-Church employees.

The move is a risky endeavor for all involved, but it's necessary, according to union activists.

"If we really want to push through improvements for nursing staff in all hospitals, then we have to go on strike here, too, now," said Michael Quetting, a representative of the regional chapter of German trade union Verdi.

The Ottweiler case draws attention to the issue that in Germany, different kinds of employees enjoy very different workers' rights.

According to article nine of the German constitution, people have the right to form groups with the goal of "upholding or improving working and economical conditions." This is the legal foundation of German trade unions.

In 1955, the Federal Labor Court passed down a verdict that declared strikes "undesirable," but not illegal. Employees would no longer have to quit before they could go on strike — a landmark decision.

During a strike, the employment contracts of participants are suspended. That means they aren't guilty of neglecting their work duties, but it also means they don't get paid by their employer for the days they are on strike. Union members receive daily "strike money," the amount of which depends on their monthly membership fees.

These are the basic rules for regular workers, trainees and interns with employment contracts at private and state institutions like factories, department stores, public transport agencies or hospitals. But for employees of the Catholic or Protestant Church in Germany, there are different rules. 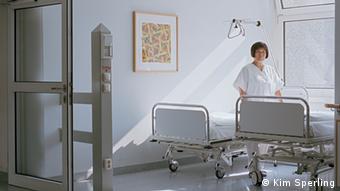 The roughly 1.3 million people in Germany who work for a church-run institution sign special employment contracts. These are often rather strict, especially when they are with the Catholic Church. Many Catholic institutions don't accept employees who aren't baptized Catholics or lead a lifestyle not in line with the church's teachings, like homosexual or divorced people. This practice is not illegal, since churches in Germany have the right to self-determination and can hire whomever and however they want.

Whether church employees are allowed to strike isn't entirely clear. Those who argue against the right to strike say that employers and employees work together to spread charity and grace in the name of faith. That's why employees shouldn't feel the need to fight their employers, as they might in a capitalist context.

Those in favor of strike rights for church employees counter that while churches have the right to self-determination, this does not cancel out the rights of unions to advocate for good working conditions as specified in the constitution.

Another group that does not have the same strike rights as regular employees in Germany are "Beamte," or public servants. They have special rights in their places of employment, like public administrations or schools. Public servants can only be fired in exceptional circumstances, for example, and have extremely good pension plans. In 2014, the Federal Administrative Court confirmed that no public servants, independent of their occupation, had the right to go on strike. According to the constitution, they fulfill special tasks in the name of the state and are in a "loyal work relationship" with their employer, which is why they cannot protest by walking off the job.

This has lead to some absurd situations, for example in schools, where teachers who are regular employees work side by side with public servants. Teachers with public servant status have to remain at school and teach when their regularly employed colleagues go on strike to protest for better wages.

For students, it can be hard to understand why their first period math teacher is waiting in class, while their second period English teacher is handing out strike pamphlets at a rally in front of city hall. And for the teachers themselves, the two-tier system looks unfair from both sides.

Rules of the strike

Finally, there are very specific strike rules even for regular employees. This is Germany, after all, and you can't just strike when you feel like it. In order to be eligible to push through demands with a strike, an employee has to work under a collective labor agreement that defines wages. A strike has to be called by a union and is only permissible if the employees' work contracts clearly mention the collective labor agreement.

If all those qualifications are fulfilled, and the employees with demands are neither public servants nor work for a church, they are free to go and join the picket line.

Four months after French President Emmanuel Macron was elected, workers have held a day of protests against changes to strict labor laws. The hard-left CGT union has called for workers to stage walkouts. (12.09.2017)

Demonstrators clashed with police in Buenos Aires as the city came to an utter standstill during a 24-hour general strike. Workers feel that the free market policies of President Macri have exacerbated income inequality. (06.04.2017)

After a hundred-day strike which crippled public hospitals, Kenyan doctors have signed a deal to end their stoppage. The government had threatened to fire the strikers and hire foreign doctors. (14.03.2017)