Kyiv hopes for more as Zelenskyy meets Merkel | Europe | News and current affairs from around the continent | DW | 11.07.2021

With time winding down on Angela Merkel's chancellorship, she will meet Ukrainian President Volodymyr Zelenskyy and face his expectations of Germany. The two have never had an easy relationship. 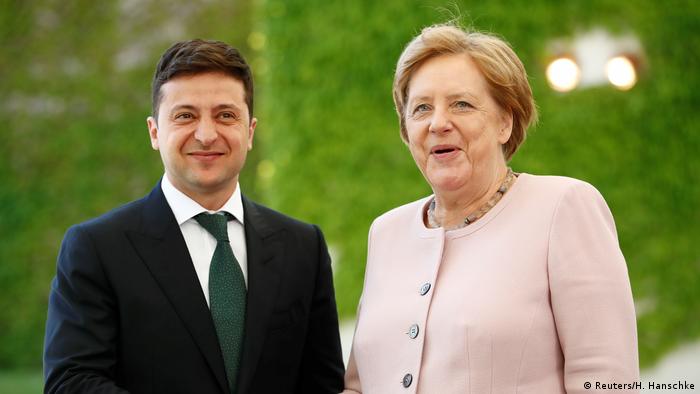 Zelenskyy and Merkel in 2019: Ukraine has voiced some disappointment at Germany's somewhat reticent help

Angela Merkel is preparing for a special farewell. The outgoing German chancellor receives the Ukrainian president, Volodymyr Zelenskyy, in Berlin on Monday for what will likely be their last meeting in person.

On several occasions, Zelenskyy has invited Merkel to Kyiv at the end of August to celebrate the 30th anniversary of Ukrainian independence. He is also keen for the chancellor to attend the founding conference of his international Crimea Platform. To date, however, Merkel has not indicated any plans to be at either event.

Since Russia annexed the Crimean peninsula in 2014, the German chancellor, as a leading Western politician, has been intensively involved in dealing with Ukraine. But ahead of this meeting, the atmosphere in Berlin is more troubled than it has been in a long time.

Diplomatic tension between Berlin and Kyiv

Despite repeated expressions of gratitude, Ukraine's frustration is also becoming increasingly apparent. The latest efforts by Merkel and French President Emmanuel Macron to organize another EU-Russia summit caused irritation in Kyiv. The Ukrainian foreign minister, Dmytro Kuleba, invited the ambassadors of both countries to a meeting, where he referred to the plan as an "unpleasant and surprising attack" and expressed satisfaction that EU leaders fail to agree on a summit with Vladimir PutinMerkel's idea was "rebuffed" at the EU summit. 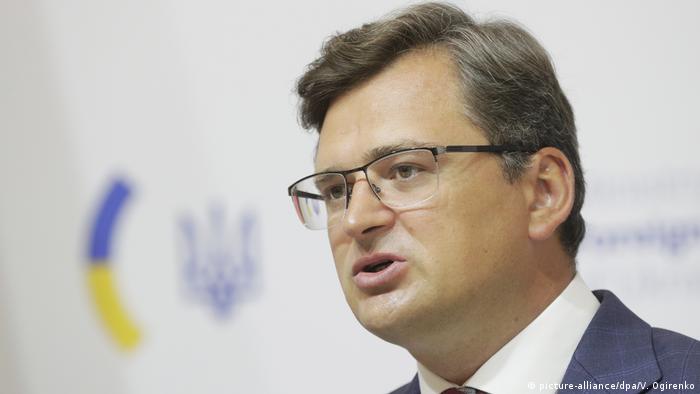 At the end of June, Ukraine's ambassador to Berlin, Andriy Melnyk, boycotted a commemorative event with German President Frank-Walter Steinmeier marking the 80th anniversary of Hitler's invasion of the Soviet Union. The venue was the German-Russian Museum in Berlin-Karlshorst, which the ambassador deemed "inappropriate."

The biggest bone of contention in relations between Kyiv and Berlin is still the Nord Stream 2 gas pipeline, which is to deliver gas from Russia directly to Germany. Ukraine opposes the Baltic Sea project because it could lose out on transit fees for Russian gas and because it fears a Russian military escalation. Now that the United States, under the leadership of President Joe Biden, has decided against further sanctions, the pipeline is set to be completed in just a few months' time.

Merkel and Zelenskyy are expected to discuss how Ukraine could be protected against potential losses. There has been speculation in the media about compensation, without any concrete details. Shortly after this, in quick succession, Merkel and Zelenskyy will both travel to Washington, where Nord Stream 2 is likely also to be on the agenda. 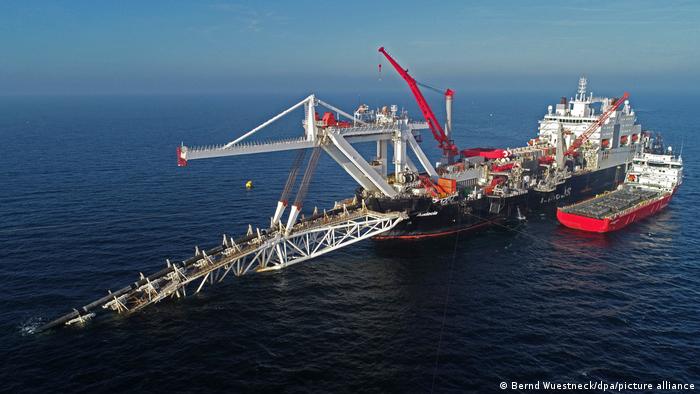 The Nord Stream 2 gas pipeline is due to be completed soon, but Ukraine is not pleased

No Merkel at the next Normandy summit

However, any breakthrough regarding eastern Ukraine is still a long way off. The situation has been deadlocked since the last four-way "Normandy Format" summit, in December 2019 in Paris. A follow-up meeting in Berlin was postponed because of the coronavirus pandemic. The most recent escalation on the frontline in eastern Ukraine was in the spring of this year when dozens of Ukrainian soldiers were killed. Russia initiated massive troop deployments to the Ukrainian border; Merkel and Macron called for de-escalation, and Moscow partially withdrew the troops.

While Zelenskyy is keen for the US to take on a bigger role in any peace talks, the Russian president does not seem interested in further meetings with the Ukrainian leader. Russian President Vladimir Putin and Zelenskyy spoke with Merkel and Macron via video conferencing recently — but they did so separately. "Why meet with Zelenskyy when he gave up his country to full external control?" Putin said during his annual Q&A with the Russian public in late June. "The key Ukrainian issues are decided not in Kyiv but in Washington, and to some extent in Berlin and Paris."

The Kremlin leader did not rule out meeting with Zelenskyy in principle, but there will almost certainly not be another Normandy summit before Merkel steps down following Germany's September general election. 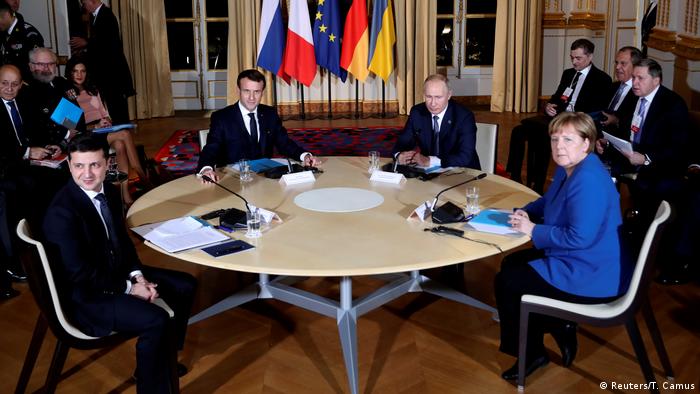 The 'Normany Format' has not taken place since December 2019

On a personal level, experts note that Merkel's relationship with Zelenskyy has not been as good as it was with his predecessor, Petro Poroshenko. Gustav Gressel of the Brussels-based think tank European Council on Foreign Relations (ECFR) said the German chancellor refused to meet then-candidate Zelenskyy in the run-up to the Ukrainian presidential election, whereas Macron received him.

"On a personal level, there was a shadow over their relationship. For Merkel, this plays a not insignificant role," said Gressel. "It didn't work out too well with Zelenskyy; he doesn't really seem to be her type."

Kyiv-based foreign policy expert Olena Hetmanchuk also said the German and Ukrainian leaders' relationship is "not the best." Zelenskyy is "not a comfortable partner" for Merkel, she added. 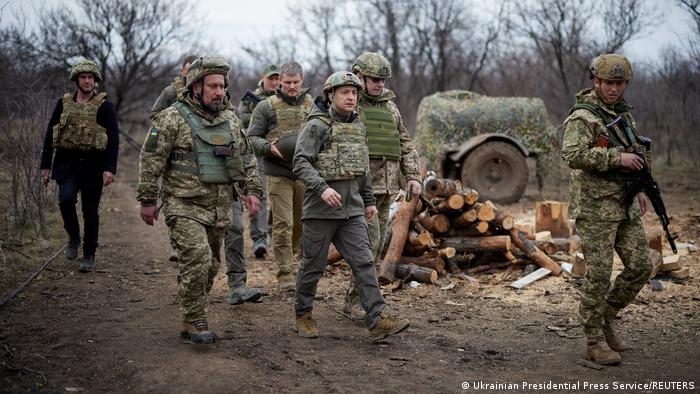 It is unclear whether Zelenskyy's critical remarks contributed to this. In a phone call with then-US President Donald Trump in July 2019, which was subsequently made public, Zelenskyy accused Merkel and Macron of not doing enough for Ukraine. This is a message he now repeats increasingly often, as for example in an interview with the Frankfurter Allgemeine Zeitung (FAZ) in early June. Fundamentally, he said, Ukraine was very grateful to Germany — but he had "expected more."

Above all, Kyiv has been disappointed by Berlin's refusal to supply Ukraine with arms. Even after the Green Party co-chairman Robert Habeck backed Ukraine's request to purchase weapons for defensive purposes, the German government reiterated its rejection. Zelenskyy told the FAZ newspaper that Kyiv was interested in items such as patrol boats, rifles and armored vehicles.

Kyiv hoping for a new beginning after German elections

It is becoming increasingly clear that Kyiv is preparing for the period after Merkel. It hopes that, with her successor, Germany will shift its position on certain issues. Zelenskyy has said Ukraine has done enough to be given "clear commitments" on the EU and NATO membership it seeks. According to Hetmanchuk, "There is an expectation that Merkel might support the prospect of EU accession for Ukraine, as a kind of parting gift."

Whether the chancellor will indeed go along with this is unclear. Kyiv is more likely to find that Berlin will continue to hold back. The leading candidates from her party as well as the Greens and the SPD have all expressed their understanding for Ukraine's wishes, but they put a damper on its hopes for movement on this issue in the near future.

A former US Special Representative for Ukraine has told DW preemptive measures should be taken to stave off the Russian threat. Kurt Volker also said Vladimir Putin doesn't want Ukraine to be a successful democracy.

The Ukrainian president said Joe Biden should have met with him before meeting Vladimir Putin. The US and Russian leaders are set to meet in Geneva on Wednesday.