Kuwait Airways is to end its New York to London flights after being threatened with legal action over its policy not to sell tickets to Israelis. Kuwaiti law prohibits all commercial relations with Israeli entities. 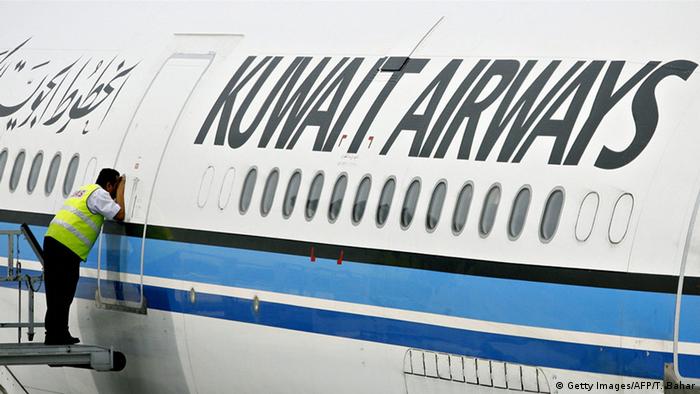 The US Department of Transportation (DOT) ordered the carrier in September to end what it called Kuwait Airways Corporation (KAC) discriminatory practice of denying service to Israeli passport holders. This week, the airline informed authorities in the US that it would eliminate the route.

Kuwait Airways defended itself by saying it was observing a requirement of Kuwaiti law. This prohibits all commercial relations with Israeli entities, residents or nationals.

In a series of legal exchanges between the airline and the US DOT, copies of which have been obtained by DW, the airline argued, "its policy is solely based on the dictates of Kuwaiti law, which prohibits Kuwaiti companies from conducting business with Israeli citizens."

Sixteen other countries from Algeria to Yemen, follow a similar policy, according to Bob Mann, an airline industry analyst in New York.

The DOT probe into KAC began in 2013 after the airline refused to sell a ticket to Eldad Gatt under his Israeli passport. Initially the DOT agreed with the airline, noting that the problem was Kuwaiti law, not airline policy.

But Gatt filed a complaint with the U.S. Court of Appeals for the D.C. Circuit; and the DOT, according to a legal brief from KAC, then renewed its investigation and ultimately reversed itself - rather than defending its original conclusion before the Appeals Court.

The financial impact, of the flight's cancelation, on KAC will be limited, according to Mann because it affects just one route.

“The primary impact on Kuwait Airways will be to decide how to utilize the 13-14 hours of aircraft and crew time,” left vacant by the ending of the New York to London route, he wrote in an email response.

Mann said the DOT action will not force broader anti-discriminatory changes among such airlines because “DOT has not sanctioned Kuwait Airways booking discrimination in its nonstop US-Kuwait market, where the service and booking practices will continue, much as they do on several other Middle Eastern carriers in their home country markets.”

A DOT official who didn't want to speak for attribution, defended the department's efforts to fight discrimination. “the secretary is adamant that discrimination is unacceptable,” she said, referring to DOT secretary Anthony Foxx. But she noted that the US government “can't force people to take people to their countries.”

Officials at Kuwait Airways, in Europe and the United States, could not be reached for comment.

Indeed, with the airlines caught between the conflicting demands of US laws on the one hand, and laws in their home countries on the other, there appear to be precious few flights by such carriers between the US and Europe.

Emirates (of the United Arab Emirates), for instance, flies to 10 US cities and more than two dozen European hubs, but the only trans-Atlantic flight that doesn't start or end in the Middle East is a New York to Milan leg.

It is unclear whether the airline prohibits passengers traveling under Israeli passports.

Hannah Cametti a corporate communications official for Emirates in New York said, “I'm definitely not authorized to answer questions like that,” and referred a caller to the firm's public relations agency, the MSL Group. But repeated calls to MSL representative Arielle Himy went unreturned.

Black and queer people in management positions, the integration of people with disabilities, female founders in India and inequality caused by climate change. What is diversity and why does it matter?