The Gulf state of Kuwait has followed Oman and Saudi Arabia in buying Eurofighter Typhoon combat aircraft. The multi-billion-euro deal will upgrade Kuwait's air force against the backdrop of increased regional tensions. 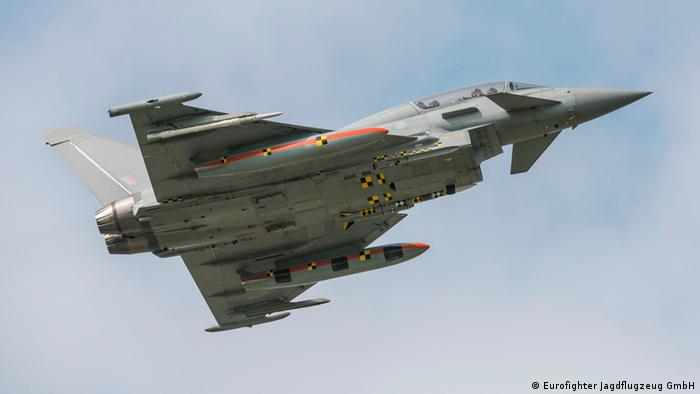 The Eurofighter consortium announced on Friday an agreement by Kuwait to buy 28 Typhoon warplanes worth between seven and eight billion euros ($8-9 billion.)

Kuwait is upgrading its airforce amid security concerns in the region linked to the rise of the self-proclaimed "Islamic State" (IS) group.

Eurofighter is a partnership between Italy's Finmeccanica, Britain's BAE Systems and civilian planemaker Airbus. The Typhoon has a price tag of around $140 million. The total number of the aircraft sold rises to 599 with the Kuwait deal.

"This new agreement is the confirmation of the superiority of the Eurofighter over its competitors and will provide a great opportunity for further Eurofighter orders," Eurofighter CEO Alberto Gutierrez said in a statement. "The Eurofighter is already proven and trusted by six nations to perform in all operational environments," he added.

Kuwait will be the third country in the Middle East, and the eighth country overall to operate the aircraft. Oman ordered 12 Eurofighter Typhoons in December 2012 and Saudi Arabia has the fighter jets in its air force.

The Typhoon first went into service in late 2003 and 444 aircraft have been delivered to six nations: Germany, Britain, Italy, Spain, Austria and Saudi Arabia.

Kuwait had been expected to make a deal for Boeing's Super Hornet F18s. Sources close to the deal told AFP that some Super Hornets might still be bought as well as the Typhoon planes.

The Rafale jet built by French firm Dassault Aviation has deals with Egypt and Qatar.