Kurdish demonstrators have burst into the European Parliament to protest inaction against the self-proclaimed "Islamic State." Turkey's president says a Kurdish town across Syria's border is about to fall. 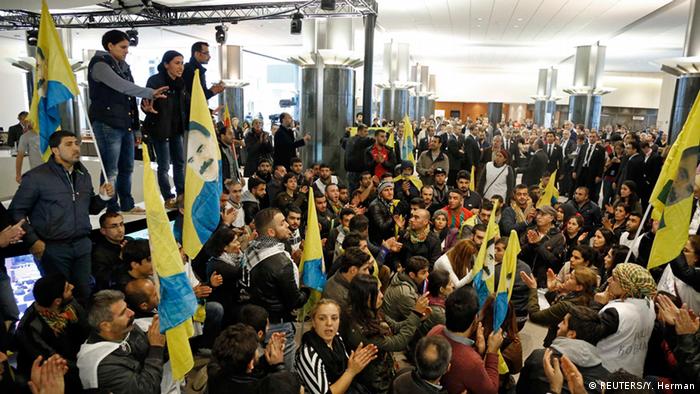 Waving Kurdish flags, the men and women broke through a police barrier to enter the European Parliament in Brussels on Tuesday. Several legislators met with the protesters, who staged a sit-in.

EU Parliament President Martin Schulz, a German Social Democrat from Aachen, said he told protest leaders to end the demonstration peacefully, saying he shared their concerns about the situation for civilians in Kobani. Syria's third-largest Kurdish town has been the scene of a three-week siege by the "Islamic State" ("IS") group, killing at least 400 people and causing at least 180,000 to flee into Turkey.

"I reiterated the support of the European Parliament for the international coalition fighting against the 'Islamic State' in Syria and Iraq," Schulz said, adding that he promised to convey their message to NATO.

The protesters burst into a secure area during confirmation hearings for the new European Commission. The parliament's security services announced that they would open a probe into the incident. Protests by Kurds took place across Europe on Monday and Tuesday.

Kurds also protested across Turkey, a NATO member that shares a 900-kilometer (550-mile) border with Syria, with protesters calling for action in Kobani. Earlier Tuesday, Turkey's president had warned that the group could seize Kobani at any time, even as warplanes from the United States and allied Arab nations launched fresh strikes. 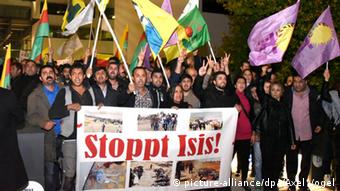 Kurdish protesters demonstrated at DW headquarters in Bonn on Monday

"Months have passed but no results have been achieved," Turkish President Recep Tayyip Erdogan said Tuesday. "Kobani is about to fall."

Police used water cannons and tear gas to disperse demonstrators in Istanbul and in the desert town of Kucuk Kenderciler, near Kobani, and killed at least one protester in the town of Varto, though reports differ as to whether he died from live fire or after a gas canister hit him.

In Germany, home to Western Europe's largest Kurdish population, about 600 people demonstrated in Berlin on Tuesday, according to police. Hundreds protested in other cities, as well as in neighboring Austria. In Geneva, Kurds held a protest at the United Nations.