Turkish president says Kobani about to fall to 'IS'

US-led coalition airstrikes are not enough to defeat "Islamic State" militants, according to Turkish President Erdogan. The leader warned that the strategic border town of Kobani was "about to fall." 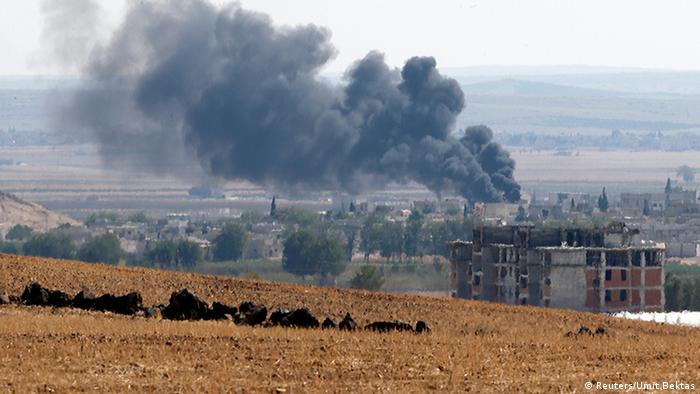 Turkish President Recep Tayyip Erdogan said on Tuesday that the Syrian border town of Kobani was about to fall to the self-proclaimed "Islamic State" (IS), warning that airstrikes alone were not enough to defeat the terrorist militia.

"Months have passed but no results have been achieved. Kobani is about to fall," Erdogan said a during a visit to a Syrian refugee camp in the eastern Turkish city of Gazientep. "I am telling the West - dropping bombs from the air will not provide a solution." 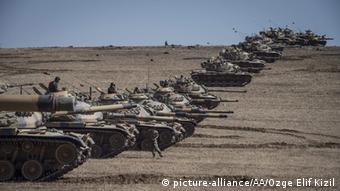 Turkey has mobilized tanks to protect its own border, but Kurds question its commitment to Kobani

"The terror will not be over…unless we cooperate for a ground operation," he said.

Erdogan added that his country was following the IS attacks on Kobani with "great concern," and that Turkey was "on guard and well-equipped for any threats directed against itself."

With the strongest army in the region, NATO-member Turkey has been pressured to join an international coalition in military strikes against the Islamic State. Last week the Turkish parliament voted to authorize military action against IS, but thus far Turkey has not gotten involved in the fighting.

The Syrian town of Ayn al-Arab is more commonly called Kobani or Kobane by its majority Kurdish population. Turkey recently ordered more than a dozen tanks to defensive positions across the border from Kobani - the government in Ankara also infuriated Kurds by refusing to allow Kurdish fighters in Turkey across the border to defend the town.

Erdogan said on Tuesday that he considered "IS" and the Kurdistan Workers' Party (PKK) that has long sought for independence from Ankara to be "exactly the same thing," accusing his critics of using Kobani to "blackmail" the Turkish government.

Erdogan - a longstanding opponent of Syrian President Bashar al-Assad during the country's civil war - has called for a no-fly zone above Syria, a secure zone to host refugees, and the training of moderate Syrian rebels to fight IS. He said on Tuesday that Assad's removal and "a free and independent Syria" remained his main goal for the neighboring country.

Recent US-led airstrikes against IS overnight on the eastern and southeastern edges of Kobani have had little effect, according to activists. "There are other places they should be hitting," activist Mustafa Ebdi said.

According to the UK-based Syrian Observatory for Human Rights, 412 civilians and fighters have been killed in the three-week siege of Kobani. Thus far, the advance of IS has sent more than 180,000 refugees fleeing into Turkey.

The Pakistani Taliban has pledged support to militant groups fighting in Iraq and Syria; a move that should be taken seriously as the number of "Islamic State" sympathizers is rising, analyst Hassan Abbas tells DW. (06.10.2014)

In attacks on the Yazidi religious minority in northern Iraq, "Islamic State" militants are said to have abducted up to 5,000 women and girls. Five survivors tell DW what they endured in 23 days of captivity. (07.10.2014)