Kosovo's lawmakers have moved to create a national army in a vote boycotted by the parliament's Serb minority lawmakers. Serbian president Aleksandar Vucic said the move could lead to "tragic consequences." 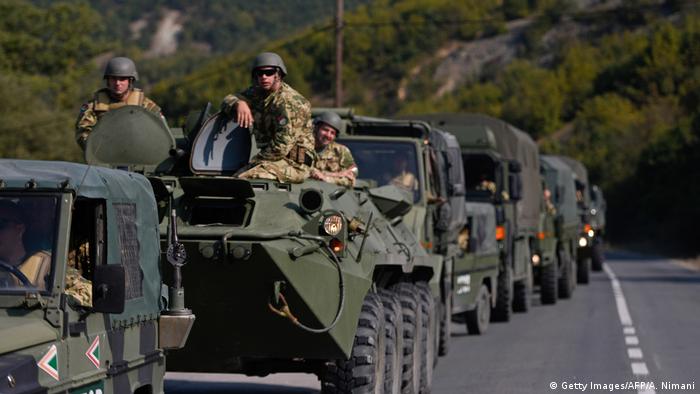 The Kosovo parliament on Thursday voted in support of establishing a 5,000-strong national army, despite the parliament's Serb minority representatives declaring the move illegal. The landlocked Balkan territory of 1.8 million people is mostly populated by ethnic Albanians, with a significant Serb minority.

Three laws, promoted by theKosovo government and passed in a first reading, upgraded the mandate of the lightly-armed domestic Kosovo Security Force (KSF) to be transformed into an army, which the government said bypassed the need to make changes to the constitution.

The draft laws received support from 98 deputies in the 120-seat parliament, but the vote was boycotted by the legislature's 11 Serb deputies and criticized by officials in Belgrade. Serb deputies fear an army would tighten the central government's grip on the autonomous Serb-majority areas near the Serbian border.

Approval in a second reading in a few days' time is required for the legislation to be completed.

Kosovo, formerly a Serbian province, declared independence in 2008, and is still guarded by NATO troops. However, the US has recently called for an exit strategy for the international forces.

Serbia 'would be cornered'

The peacekeepers' pullout and the creation of the Kosovo army could lead to "tragic consequences," said Serbian strongman Aleksandar Vucic after speaking to US Deputy Assistant Secretary Matthew Palmer in Belgrade on Friday.

"I have pointed out that we would have a big problem and would be cornered" if the Kosovo army would be deployed to the Serb-dominated regions, Vucic told reporters.

NATO moved into the state in June 1999, following weeks of air strikes by the alliance, to end the killing and expulsion of ethnic Albanian civilians by Serbian forces fighting a two-year counter-insurgency after the break-up of Yugoslavia. The US has continued to back Kosovo authorities in their push towards independence, and the young state remains firmly allied with Washington.

Following the vote in the Kosovo parliament, the US embassy in Pristina urged the Kosovo officials to create a "professional, multiethnic military" which would closely coordinate with NATO.

"Serbia will protect its interests on the whole of its territory," Djuric said, reaffirming Belgrade's position that Kosovo is still a part of Serbia.

Serbian Defense Minister Aleksandar Vulin said in a statement that the only armed forces in Kosovo must be NATO-led peacekeepers and that a Kosovo army would "threaten Serbia and the Serbs."

The US-led NATO alliance, which has 4,000 troops in the Balkan country, has also in the past urged Kosovo not to create a national army unless it had the support of the Serb minority.

It is not the first time the nationalist-dominated government has tried to create a national army. Last year the government's attempt was stymied by the refusal of Serb politicians to agree to change the constitution.

The United States and most of the EU member states recognize Kosovo, but objections from UN Security Council members Russia and China, which back Serbia in not accepting Kosovo's independence, have prevented it from becoming a member of the United Nations.

Kosovo and Serbia also have to normalize their relations if they are ever to become members of the European Union.

Who was Oliver Ivanovic, the murdered Serb politician in Kosovo?

The murder of key Serb leader Oliver Ivanovic threatens to reignite tensions in the ethnically fueled dispute between Serbia and Kosovo. The moderate politician had faced intimidation several times before his death. (16.01.2018)

Kosovo becomes UEFA member - much to the chagrin of Serbia

UEFA, European soccer's governing body, has voted to make the small Balkan nation of Kosovo its 55th member. Kosovo won the vote despite strong opposition from Serbia to its application. (03.05.2016)

Solving the conflict between Serbia and Kosovo requires frank talks, says Austrian Balkans expert Wolfgang Petritsch. He believes Brussels must prioritize the relations of the western Balkan states with the EU. (10.12.2017)