The prime ministers of Serbia and Kosovo have put their initials to a deal to normalize relations between their governments. The talks were brokered by the EU, partly with an eye on bloc membership for both parties. 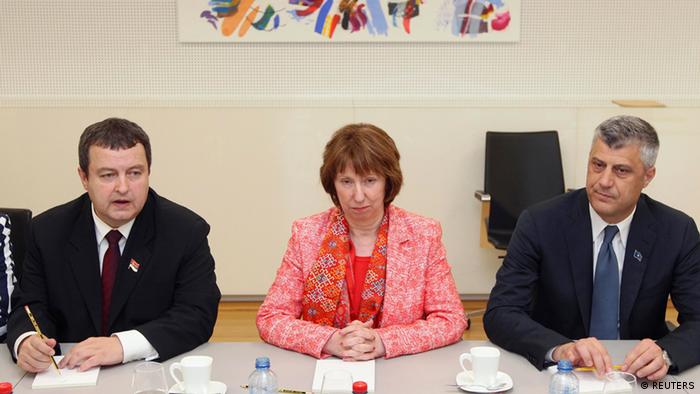 Serbia and its former province of Kosovo agreed on Friday to an EU-brokered deal aiming to normalize relations between the two countries.

The talks sought to improve ties between the uneasy neighbors, five years after Kosovo unilaterally declared independence from Serbia in 2008.

"These negotiations have been concluded," EU foreign policy chief Catherine Ashton, who chaired the negotiations, said on Friday. "The text has been initialed by both prime ministers."

Ashton was referring to Serb Prime Minister Ivica Dadic and his counterpart from Kosovo, Hashim Thaci.

"What we are seeing is a step away from the past and, for both of them, a step closer to Europe," Ashton said.

News agency Reuters reported that point 14 of the accord, which is yet to be publicly released, stated "that neither side will block or encourage other to block the other side's progress in their respective EU paths."

"I am confident that the agreement reached between the two sides will pave the way for [EU member states] to take decisions on the next steps on the European path of Serbia and Kosovo," Barroso said.

Serbia effectively lost control of Kosovo after the 1998-99 war, when NATO forces intervened to stop Serb attacks on the majority ethnic Albanian population in Kosovo. Since then, the region has enjoyed comparative authority, before formally declaring itself independent in 2008. Some 5,000 NATO peacekeepers, known as KFOR (Kosovo Force), are still active in the region.

"I am very happy for NATO to contribute to the conclusion of an historic agreement," NATO Secretary General Anders Fogh Rasmussen said. "As we have done in the past, NATO and in particular KFOR will stand ready to support the implementation of this latest agreement to the best of our ability within our current mandate."

More than 90 countries, including 22 of 27 EU members, recognize Kosovo. Some of the most key countries not to are Russia, China, EU members Greece, Cyprus and Spain, and Serbia itself.

"And the white smoke is out! Habemus pactum! Happy :)))," Citaku wrote, before later saying that, under the agreement, "Kosovo laws and constitution to be applied throughout the country, north, east, west and south."

This statement seemed to suggest that Serbia had allowed Kosovo the right to police the north of the country, a small region of some 50,000 people with a majority ethnic Serb population that do not accept the authority of the government in Pristina. In the past, Serbia had sought the right to continue its effective control of this small enclave; a condition Kosovo rejected, saying this would amount to the partition of the country.

Kosovo's foreign minister, Enver Hoxhaj, said on Twitter that "with this agreement Serbia has accepted Kosovo's international subjectivity, sovereignty, territorial integrity and the Constitution and laws."

Such details could not be independently verified, although Citaku also said that the as yet unpublished agreement "will be made public soon."