Kosovo's parliament has voted to set up a court to prosecute alleged war crimes committed during the 1998-99 war. Pristina has been under mounting pressure from the US and the EU to establish the court. 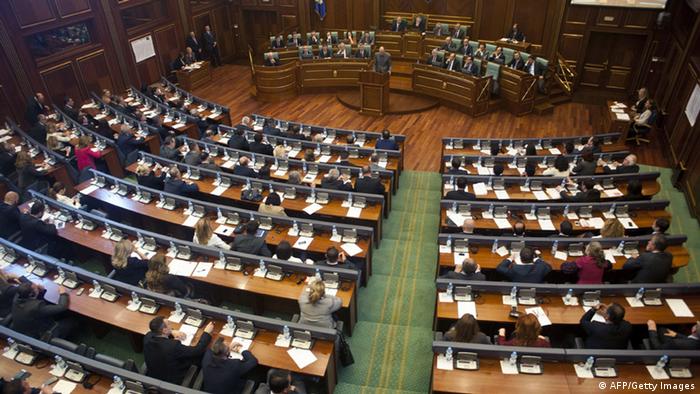 Kosovo's lawmakers on Monday approved the constitutional amendments required to allow for the court to be set up by a vote of 82 for and five against, with many of the other members of the 120-seat assembly choosing to abstain. This gave the measure just over the two-thirds majority needed to pass after parliamentarians failed to approve the amendments in virtually identical legislation in late June.

Later in the evening they were expected to pass the draft legislation to actually establish the war crimes court, to be located outside of Kosovo, probably in the Netherlands.

"Finding the truth about some allegations from during and after the war is a challenge that we have to deal with," Prime Minister Isa Mustafa told lawmakers prior to the vote. He also noted that setting up the court was "an explicit request of Kosovo's strategic partners, especially the United States of America and the European Union."

Since a 2010 Council of Europe report on war crimes allegedly conducted by ethnic Albanian KLA guerillas during the war, the US and the EU have been demanding that Kosovo set up the special court.

The report, authored by the Council's special rapporteur, Dick Marty, said it had uncovered evidence that the KLA had abused, tortured and killed around 500 prisoners, mostly ethnic Serbs and Roma. Among the alleged crimes were reported abductions, summary executions and the trafficking of prisoners' organs by KLA members.

Among the former guerillas accused in Marty's report is foreign minister and former Prime Minister Hashim Thaci, whose Democratic Party is part of Mustafa's coalition. Thaci is accused in the Council of Europe report of helping run a criminal ring that targeted mainly Serbs and Roma, however he has denied any wrongdoing. On Monday, Thaci delivered enough of his party's votes to ensure the passage of the constitutional amendment, after they had undermined the previous attempt back in June.

With the help of a 1999 NATO bombing campaign, the guerillas pushed back the Serbian forces, before the former Serbian province was placed under United Nations administration for most of the following decade. In 2008, Kosovo declared its independence, a move that has been recognized by more than 100 countries. Serbia and Russia are not among them.

Former Kosovo Prime Minister Ramush Haradinaj has been detained in Slovenia. He is wanted by Serbia for his alleged role as a guerrilla commander during the Kosovo war that came to an end in 1999. (17.06.2015)

Kosovo's ruling party, led by Prime Minister Hashim Thaci, has claimed a third term in office. The election was marred by low turnout, attributed to growing frustration about corruption. (09.06.2014)