Kosovo's ruling party, led by Prime Minister Hashim Thaci, has claimed a third term in office. The election was marred by low turnout, attributed to growing frustration about corruption. 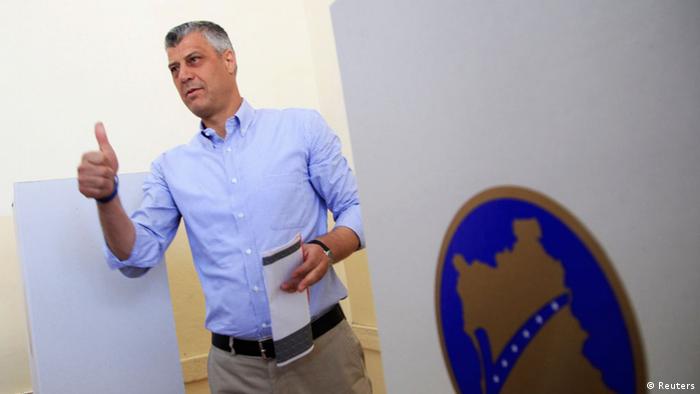 With votes counted from 70 percent of polling stations on Monday morning, Thaci's Democratic Party of Kosovo (PDK) had 30 percent of the vote, ahead of its key rival the Democratic League of Kosovo (LDK), which had 26 percent.

It is expected that Thaci will form a coalition government with smaller parties and ethnic Serbs to secure his government. Turnout was down, at 43 percent, with widespread disaffection about corruption and a lack of economic progress since the country seceded from Serbia in 2008.

"Tonight, Kosovo has won. From tomorrow we will start work on our new mission," Thaci told supporters in the capital, Pristina. "We will tell the world that Kosovo's independence was just the beginning, not the end."

Thaci had earlier urged voters to "send a message to Europe that we are a democratic country."

Investigation into sale of organs

There was some participation in the vote from minority Serbs who had been encouraged to vote by Belgrade. The Serbian government, keen to advance its EU membership bid, had been urged by Brussels to try to increase voter turnout.

It is expected that the government will face pressure to heed the findings of a war crimes investigation that may implicate some of Thaci's former comrades-in-arms. The probe followed a 2011 report from Council of Europe rapporteur Dick Marty, with allegations that Kosovo's guerilla army harvested the organs of Serb prisoners of war and sold them illicitly during the 1998 to 1999 conflict. Among those linked with the allegations is Thaci's party deputy Kadri Veseli.

Western powers have called for a court to be set up - outside Kosovo - to investigate the allegations, which Thaci has described as "an outrage." Two months ahead of the election, Thaci boosted public sector wages by 25 percent and has promised to increase them year-on-year, if elected.