Some 21,000 residents of Koblenz were obliged to move out of their homes while a World War Two bomb was made safe. The biggest evacuation of its kind in postwar Germany will be held in Frankfurt for similar reasons. 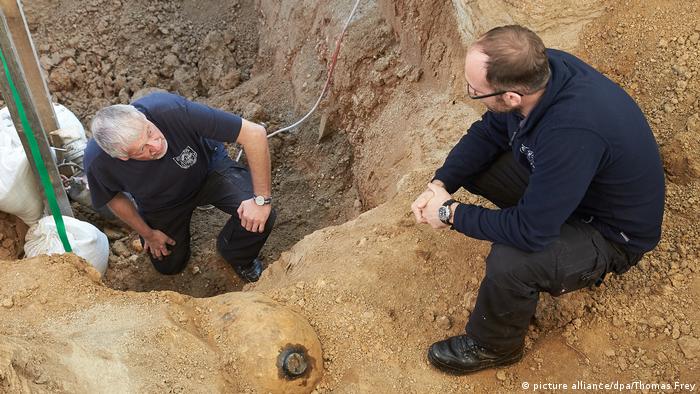 The German city of Koblenz ordered an evacuation of 21,000 people on Saturday as specialists disposed of an unexploded bomb dropped by the US during World War Two. The city was obliged to move prison inmates, hospital patients and residents in care as a precaution while authorities tackled the 500 kilogram (1,100 pound) device.

The disposal began at 3 p.m local time (1300 UTC). Later on Saturday afternoon, the authorities gave the all-clear for residents to return to their homes, saying the bomb had been sucessfully removed and deactivated.

At the same time, the city of Frankfurt was preparing for an evacuation on Sunday - the largest in Germany in over 70 years. More than 70,000 people were to leave their homes in the country's financial capital after officials discovered a British bomb in the west of the city that is three times as big as the one in Koblenz.

On Saturday afternoon, Frankfurt began moving patients from two hospitals within the 1.5 kilometer (about one mile) danger zone. The potential danger is so large, authorities have said they are prepared to use force to clear the area and have threatened locals who refuse to leave with incarceration. Residents are expected to be allowed to return home around 8 p.m. (1800 UTC)

Such large scale evacuations are still relatively common in Germany. According to the Smithsonian, the British and US air forces dropped around 2.7 million tons of bombs across Europe during World War Two, about half of them on Germany. Researchers estimate that about 10 percent of the explosive devices failed to detonate.

Bomb experts are called in before any major building project can begin in areas where there was Allied shelling, which is often how the material is found.

One of the most dangerous bombs found to date was in the city of Dortmund in 2013. Some 20,000 people were forced to leave their homes while authorities dismantled a 4,000 pound bomb that had the power to destroy an entire neighborhood.

Police have evacuated some 97 inmates from a Regensburg prison after an unexploded bomb from World War II was discovered nearby. Some 1,500 local residents were also ordered to leave so the bomb could be defused. (01.07.2017)