Saudi Arabia's top prosecutor has recommended the death penalty for five of the suspects charged in the murder case of dissident writer Jamal Khashoggi. However, he denied Crown Prince Mohammed bin Salman's involvement. 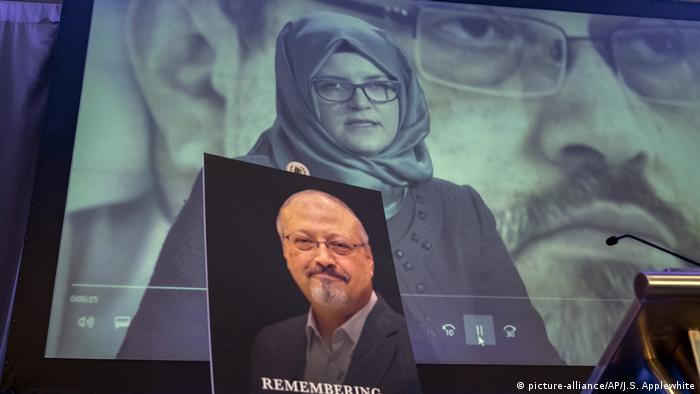 Saud al-Mojeb, the kingdom's top prosecutor, announced on Thursday that he was recommending the death penalty for five of the 11 suspects who have been charged with ordering and carrying out the killing of Saudi journalist Jamal Khashoggi, who was killed in the Saudi Consulate in Istanbul.

He did not name the suspects. In total, 21 people have been arrested in connection with the case.

Khashoggi, a regular contributor to US newspaper The Washington Post, was a staunch critic of Saudi Crown Prince Mohammed bin Salman. His murder caused international outrage, and many believe it could not have been carried out without bin Salman's knowledge.

The prosecutor, however, claimed the crown prince was not involved in the killing. He said the highest-ranking member of the Saudi leadership implicated in the operation was former deputy intelligence chief Ahmad al-Assiri, who has since been fired for ordering Khashoggi's forced return.

A spokesman for the prosecution told reporters that plans to assassinate Khashoggi were set in motion on September 29.

"The crime included a fight and injecting the citizen Khashoggi with a drug overdose that led to his death," the official said. The body was dismembered and handed over to a local collaborator, he added. He did not give any details on the location of the body.

Khashoggi entered the Saudi Consulate in Istanbul on October 2 to get paperwork for his upcoming wedding. His fiancée raised the alarm when he did not return. After weeks of denials and under growing international pressure, Riyadh finally admittedthat Khashoggi was killed in the consulate in a "rogue" operation.

On Thursday, US Treasury Secretary Steven Mnuchin announced that the US was placing harsh economic sanctions on 17 Saudis for their alleged involvement in the Khashoggi murder.

In a statement, Mnuchin said: "The Saudi officials we are sanctioning were involved in the abhorrent killing of Jamal Khashoggi. These individuals who targeted and brutally killed a journalist who resided and worked in the United States must face consequences for their actions."

Three of the individuals targeted in Thursday's sanctions were Saud Al-Qahtani and Maher Mutreb, both of whom are top aides to Salman, and Mohammed Alotaibi, consul general at the Istanbul consulate at the time Khashoggi was murdered.

The US treasury secretary said Qahtani "was part of the planning and execution of the operation" to kill Khashoggi. The secretary stopped short of accusing the crown prince of involvement.

The sanctions fall under the Department of the Treasury's Office of Foreign Assets Control (OFAC) and were issued as part of the US Global Magnitsky Human Rights Accountability Act. Such sanctions freeze targets' assets if they fall under US jurisdiction. The sanctions also forbid Americans and US companies from conducting business with them.

Mnuchin's statement also said: "The Government of Saudi Arabia must take appropriate steps to end any targeting of political dissidents or journalists."

Trouble with the Turks

The case has caused a row between the kingdom and Turkey, whose government insists the suspects should be tried in Turkey. Foreign Minister Mevlut Cavusoglu called the Saudi prosecutor's statement "positive but insufficient," insisting that Khashoggi's murder was "premeditated."

Cavusoglu said the Thursday announcement by Saudi Arabia's top prosecutor fell short of his own country's expectations: "I want to say that we did not find some of his explanations to be satisfactory" and that "those who gave the order, the real perpetrators, need to be revealed. This process cannot be closed down in this way."

Cavusoglu also questioned why Saudi Arabia had only indicted 11 of the 18 suspects detained. He pointed out that the Saudi prosecutor made no mention of where Khashoggi's remains were taken: "There is a question that has not been answered yet.

After speaking with the Saudi foreign minister, US Defense Secretary Jim Mattis said there'd be a full investigation by the Saudis into the killing of journalist Jamal Khashoggi. Riyadh denied responsibility for weeks. (28.10.2018)