Nearly 70 percent of the Kenyan population relies on costly and environmentally damaging energy sources. But a green transtion is underway, as ever more Kenyans turn to solar power to meet their daily energy needs. 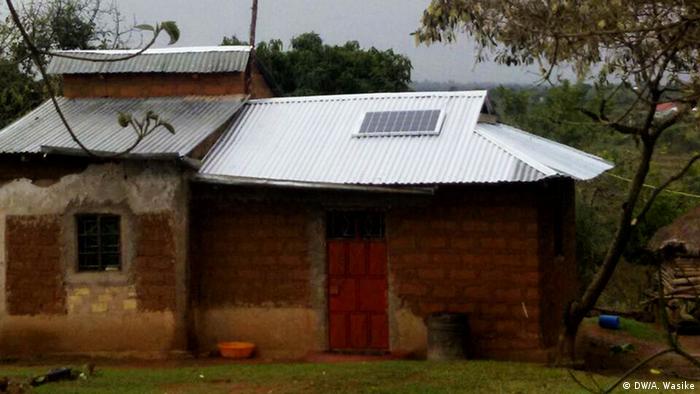 Peter Theuri is busy tending his crops in central Kenya's Kiambu County. Slung over one arm, he carries a basket of freshly picked vegetables. The 45-year-old father of two depends on his little farm to feed his family and pay his children’s school fees. Beyond that, the remaining income helps fulfill his family's basic needs.

Keeping his crops irrigated is a matter of survival. And that means pumping water up from a well, a job he always used to perform with a diesel-powered pump, which he describes as “hectic,” “troublesome,” and “tiresome.”

Perhaps worse, diesel pumps generate greenhouse gas emissions that contribute to climate change, which is already putting African farmers under pressure. And the exhaust can pose a risk to human health.

“But I had to do it," Theuri told DW. "I had no alternative at that time."

That’s changed. Theuri is one of a growing number of Kenyan farmers to have ditched noisy, polluting diesel in favor of a solar-powered pump.

The new system cost Theuri 250 US dollars, roughly the same price as a diesel generator. But unlike the generator, Theuri doesn't have to buy 2 dollars worth of diesel each day to keep his farm irrigated.

The system pumps the water all the way up to a tank elevated 3 meters above ground, he explains. From there, the gravity does the work, as the water flows down onto his crops. "The solar pumps the water during the day - you irrigate your farm in the evening," Theuri explains.

"No to diesel-generated pumps - direct to solar power. No bills, no charges… absolutely free, God-given," he adds with a smile.

Solar power is becoming increasingly popular in Africa, especially in rural communities, where grid connections are scarce and too expensive for most farmers. 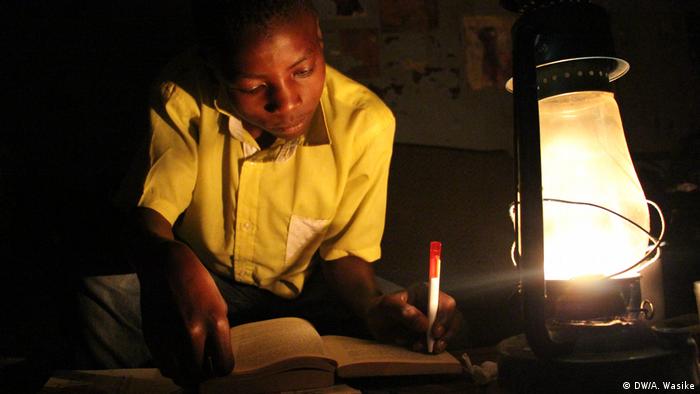 Clinic manager Joyce Koin has yet to install solar panels at home, and her son still studies by kerosene lamp

Current projections from the International Renewable Energy Agency (IRENA) show that at least 70 percent of Africa's 600 million people are not connected to the electricity grid. Instead, most are forced to rely on inefficient, expensive and polluting energy sources to power their homes and businesses.

"Rural populations depend largely on firewood, charcoal and kerosene for lamps or lanterns to light their homes," says Francis Njoka, a renewable energy expert at the Jomo Kenyatta University of Agriculture and Technology in Nairobi.

But a transition to clean, low cost solar energy is under way. In East Africa, more than 350,000 people already use solar panels to light their homes. That number is expected to rise as costs continue to fall.

According to IRENA, the price of solar home lighting systems has fallen by as much as 80 percent since 2010. A small-scale system now costs around 100 euros.

In Kenya, enthusiasm for solar power has meant that so far the sector "has been able to grow without much government support," Njoka says.

But in order to accelerate change and bring the benefits of solar to more Kenyans, he believes the state must now invest heavily in renewable energy.

Solar power can help tackle key problems in Kenya - beyond the home and fields. For example in the health sector. Before rooftop solar reached health clinics in remote areas of Kenya, some registered deaths due to a lack of electricity.

At the Merueshi clinic in Kajiado County, manager Joyce Koin explains that solar panels now provide from 12 to 14 hours of lighting. It’s cheaper and more efficient than kerosene - and has had a big impact on her work.

"Before the solar lighting system reached our clinic, we used to close very early because it was dark," Koin told DW. "Now with solar energy, we are able to attend to patients who need emergency care at night," she explains, pointing out the solar panels mounted on the roofs.

"At night, when you look at our clinic from afar, you might think it's a city because of the bright lights," Koin says.