Somali militant group al-Shabab has claimed responsibility for a deadly attack at a Nairobi hotel complex. After hours of clashes, the Kenyan president said "all terrorists have been elimated."

Women in Kenya working against terror

Women in Kenya working against terror

Kenyan President Uhuru Kenyatta said on Wednesday that securities forces had killed all the "terrorists" involved in an attack on a hotel complex that left 14 people dead.

Kenya has frequently been targeted by the Somali militant group al-Shabab, which claimed responsibility for the attack in Nairobi on Tuesday. 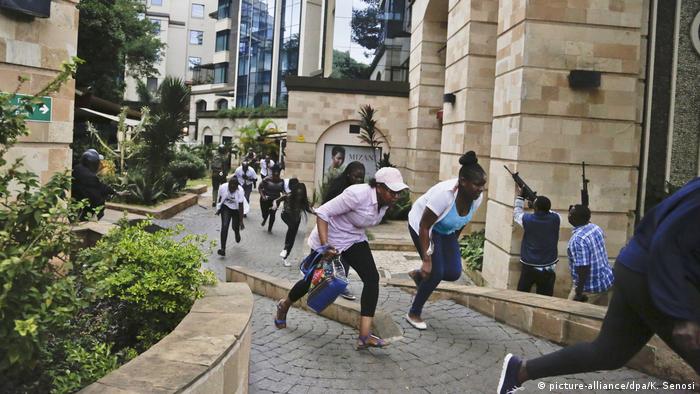 People at the hotel were forced to flee during clashes

On Tuesday afternoon, a group of armed men stormed the hotel complex and opened fire on security forces with at least one suicide bomber detonating explosives strapped to his body in the foyer of one of the buildings.

Immediately after, Kenyan security forces launched an operation to flush out the militants in what became a 20-hour siege of the hotel complex. Hundreds of people were trapped inside throughout the clashes. President Kenyatta said 700 civilians were rescued by security forces when the operation came to an end.

Al-Shabab has repeatedly targeted Kenya since Nairobi deployed its military in Somali to fight the al-Qaeda-affiliated group. In 2013, at least 67 people were killed when al-Shabab militants stormed the Westgate shopping mall in Nairobi. Two years later, more than 140 people were killed at a university.

In a statement, al-Shabab said the hotel siege "came as Kenyans and their media are commemorating the el-Adde attack," in which the militant group attacked an African Union base in Somalia. It said it killed more than 200 soldiers in that attack three years ago. Kenyan authorities never released details about the casualties of the attack.

Chinese money is cranking up Africa’s economy. However, the conduct of some Chinese people on the continent is causing displeasure among the locals. Does 'Chinafrica' have a racism problem? (09.11.2018)

Coronavirus: China locks down two cities a year after Wuhan 2h ago