Kashmir: Modi engages with local leaders, but why now? 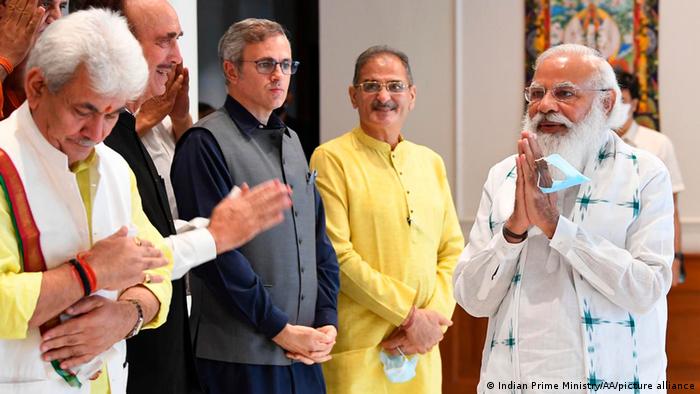 The Kashmir state was stripped of special powers, including the right to its own constitution and flag in August 2019

But apart from its symbolic value, the meeting failed to achieve anything substantial. The major bone of contention remains the scrapping of Kashmir's special status by the Indian government in 2019.

The regional representatives who were present said the federal government did not respond to the demand for statehood before elections.

"I told him [PM Modi] that the way Article 370 was illegally and unconstitutionally abrogated on August 5, 2019, and that it is not acceptable to the Kashmiri people. We will continue to fight for the restoration of special status through legal and constitutional means," Mehbooba Mufti, a former chief minister of India-administered Kashmir, told reporters after the meeting.

Muslim-majority Kashmir is divided between India and Pakistan, both of which claim it in its entirety.

The Kashmir state was stripped of special powers, including the right to its own constitution and flag, in August 2019. It was also divided into two federally controlled territories: Ladakh, and Jammu and Kashmir.

The central Indian government insists that the measures were needed to curb terrorism and boost economic development in the region. But many Kashmiri leaders see the move as a disenfranchisement campaign by Modi's Hindu nationalist government.

Modi, however, expressed optimism about his outreach.

"Today's meeting with political leaders from Jammu and Kashmir is an important step in the ongoing efforts towards a developed and progressive Jammu and Kashmir, where all-round growth is furthered," the premier tweeted on Thursday.

What does Modi want?

Experts say that Modi is keen to show to the world that normalcy has returned to the region, and that a political dialogue is ongoing.

Navnita Chadha Behera, a Kashmir expert, told DW that Kashmiri leaders and New Delhi need to agree on a roadmap for the future of Jammu and Kashmir.

"It is an effort in the right direction, but New Delhi is holding all the cards. The government has failed to give assurances to Kashmiri politicians on statehood," Behera told DW.

Kashmiri leaders accuse Modi's Bharatiya Janata Party (BJP) of making demographic changes in the region to favor Jammu's Hindu-majority areas. The Kashmir Valley, which roughly accounts for 60% of the Union Territory's population, has 46 seats in the 83-strong regional parliament, whereas Jammu has 37.

Political analysts warn that any attempt to grant more seats to Jammu's Hindu-majority areas is likely to have a huge backlash from the Muslim-majority areas.

Some analysts also see a geopolitical consideration behind Modi's move to engage with Kashmiri leaders.

"US troops are withdrawing from Afghanistan and the Taliban are gaining an upper hand. The situation in the region requires cooling of tempers between India and Pakistan," Anuradha Bhasin, executive editor of Kashmir Times newspaper, told DW.

Security analysts also say that the ceasefire at the Line of Control (India-Pakistan border along Kashmir), and Modi's Kashmir outreach are part of the same approach.

"A process has started, but it is just a beginning. I said in the meeting that we need to restore the trust between New Delhi and Kashmir," Omar Abdullah, leader of Kashmir's National Conference party, told DW.

Radha Kumar, a policy analyst, said she was disappointed by the meeting's outcome and remained pessimistic about the region's future.

"There is nothing much to cheer about. I am not sure that Kashmiri politicians who participated in the meeting would agree to go along with the Union Territory elections with vague promises from New Delhi?" Kumar told DW.

The expert, however, is of the view that both sides need to be flexible to achieve political settlement in Kashmir.