Journalists in Brussels gave President Barroso a round of applause as he reacted to the Nobel Peace Prize announcement. But EU officials were keen not to display any excessive signs of celebration. 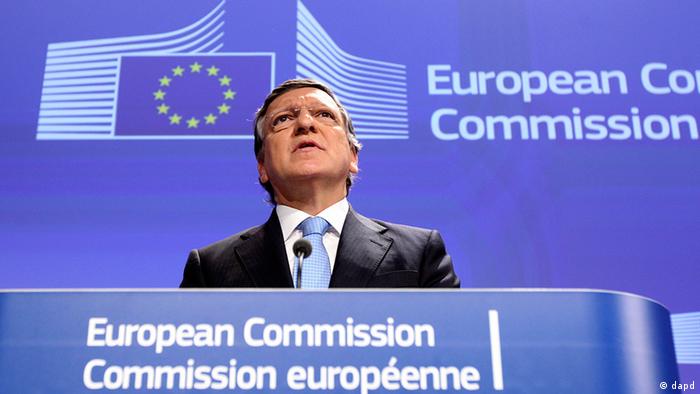 When the news of the Nobel Prize came through there was a buzz in the Brussels newsroom.

"That's scuppered my plans for the day," one journalist said wryly. Just minutes later, the media were invited to a press conference given by European Commission President Jose Manuel Barroso.

The president admitted to journalists that he had not expected such a good day when he woke up this morning. 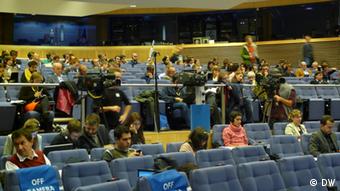 The press gave Barroso a rare round of applause

"It was with great emotion that I received the news of the award of the Nobel Peace Prize to the European Union," he said, adding that it was "justified recognition for a unique project that works for the benefit of its citizens and also for the benefit of the world."

As he left the room, journalists broke into a spontaneous round of applause, with some commenting on the momentousness of the occasion.

"I was in the commission press room and I saw something I thought I will never see," said senior editor at EurActiv, Georgi Gotev. "[Barroso] is a symbol of Europe in a way, but in any case you don’t see this very often."

The whole of Brussels seemed to be alive to the news - TV crews rushed to set up their cameras in key positions, and many others had to alter their plans for the day.

For once, the EU was making the headlines for all the right reasons. And there were smiles on many of the faces of commission spokespeople at the daily midday briefing.

However, officials were keen to avoid self-congratulation - especially during these times of deep economic turmoil.

"To my knowledge, at least in this building, no champagne corks have been unbottled," said Commission spokesperson Pia Ahrenkilde, acknowledging that plans for the day had to be altered as a result of the news.

Speculation about the prize

There was speculation about what would be done with the prize money - worth just less than 1 million euros ($1.1 million) - and about who should collect the prize when it is awarded in Oslo in December. The spokesperson said that such details have yet to be discussed.

"How exactly we receive this prize on behalf of the European Union - and all its citizens - is something that will be decided soon," she said. 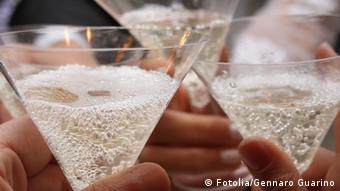 Jean Quatremer, Brussels correspondent for the French daily, Liberation, tweeted that "instead of boring Barroso and Van Rompuy," an ordinary EU citizen should collect the prize.

"I think Jacques Delors should receive the Nobel prize in Oslo. We are so lucky to have one of the fathers of Europe alive and kicking," tweeted EurActiv’s Georgi Gotev.

Beyond the cynicism of some, the award is already being seen as a boost to morale for the EU as it struggles with attempts to resolve the economic crisis.

"I know this is a bit naïve ... but it feels good. Nice way to end a week!" tweeted Marco Incerti of the think tank the Centre for European Policy Studies.

Critics say Alfred Nobel's vision of the Peace Prize has been watered down: he wanted to recognize leaders working on disarmament, not human rights and other activists. DW spoke to Norwegian lawyer Fredrik Heffermehl. (12.10.2012)

For years, the European Union has been on the list of Nobel Peace Prize candidates. The decision to award the 2012 prize to the bloc is a tribute to the EU's international reconciliation work, says DW's Bernd Riegert. (12.10.2012)

The EU 'doesn't always practice what it preaches'