Attacks and kidnappings of journalists have soared over the past year, the latest Press Freedom Index by Reporters without Borders has said. In all, 66 journalists were killed in 2014. 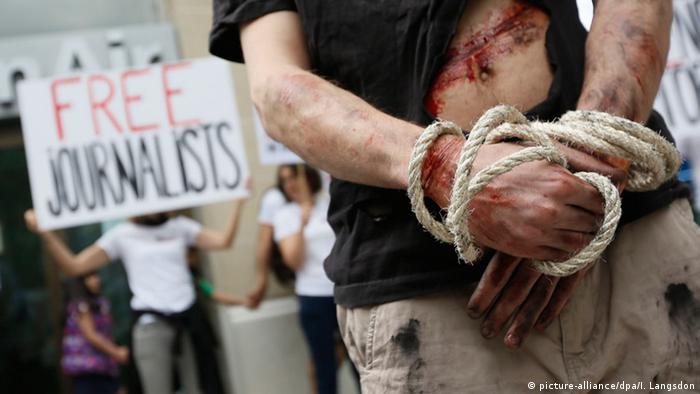 Reporters without Borders said on Tuesday that there had been a sharp spike in kidnappings of reporters, with attacks on reporters growing more 'barbaric.'

In its latest report on press freedom, it said journalists face a new dangerous new threat - as shown by the Islamist militant beheadings of reporters in Syria this year.

"Rarely have reporters been murdered with such a barbaric sense of propaganda, shocking the entire world," Reporters Without Borders said.

66 journalists were killed this year, down from 71 in 2013, although the nature of the killings was troubling, the report said. The deadliest countries for journalists' lives were Syria, where 15 died, followed by Iran, Eritrea, eastern Ukraine, Iraq and Libya.

"The 2014 World Press Freedom Index spotlights the negative impact of conflicts of freedom of information and its protagonists," Reporters without Borders said.

This year's report covered 180 countries. Finland was the best place for journalists to continue their work- the Scandinavian nation retained its position for the fourth year running, followed by the Netherlands and Norway. Turkmenistan, Eritrea and North Korea were, once again, at the bottom of the list.

The report said that the ranking of some countries this year was affected by a "tendency to interpret national security needs in an overly broad and abusive manner to the detriment of the right to inform and be informed."

Information was sacrificed in the name of national security and surveillance, the report said, citing the example of the US, which fell 13 place to 46 following "increased efforts to track down whistleblowers and the sources of leaks."

The trial and conviction of Private Bradley Manning, now known as Chelsea Manning, and the pursuit of NSA analyst Edward Snowden "were warnings to all those thinking of assisting in the disclosure of sensitive information that would clearly be in public interest," the report said.

Annual press freedom rankings regularly spark global interest but it's not always clear how they're compiled or interpreted. Journalists and media experts took a closer look at a podium discussion in Berlin. (10.12.2014)