Reporters Without Borders: Russian laws ′lead to self-censorship′ | Europe | News and current affairs from around the continent | DW | 29.01.2014

Journalists reporting from Sochi on the Olympic Games should take measures to protect themselves and their sources, says Christian Mihr, CEO of Reporters Without Borders, pointing to Russia's limited press freedom. 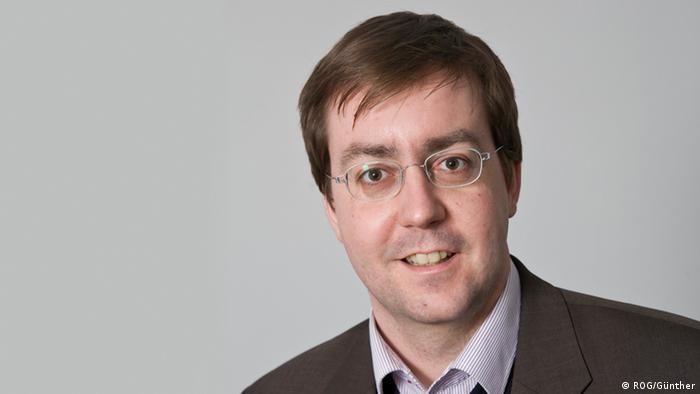 Christian Mihr: Since May 2012 - the start of Vladimir Putin's third presidential term - numerous laws have been passed that allow censorship and extensive surveillance. Many journalists complain that these laws have placed them under the sword of Damocles. That leads to self-censorship.

We also observe numerous attacks on journalists in Russia. Since 2000, we have counted 30 journalists who have been killed. In just the past two years, there have been more than 30 attacks, most of which went unpunished. A large number of [the attacks] happened in the North Caucasus region, where the Olympic Games are to be held.

How does the Russian government control its media?

Nearly all media organizations are either government-owned or close to the government. Television in Russia was more or less brought into line. That poses a particular danger to press freedom because TV is the most important political information source for most Russians.

What laws are hindering the work of journalists in Russia?

The most recent example is a stricter cyber law to go into effect on February 1. The law allows blocking of websites with "extremist content," including calls for unauthorized protests that could also be published on journalistic websites. 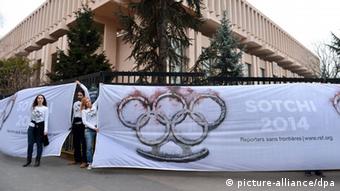 In November 2012, the Duma passed a law on treason and espionage. Everything that might threaten the country's security now qualifies as treason. That can pose a problem for journalists reporting on security issues.

In April 2013, all swearwords in media were banned. The ban applies to journalists, their interview partners and readers' comments. There is also a ban on "propaganda for non-traditional sexual relations in the presence of minors," which de facto also targets reports on homosexuals. Fines can run up to one million rubles (23,000 euros; $31,000). Media organizations can be shut down for up to 90 days.

How is Russia's position on press freedom reflected in reports on the Olympics?

The state media has run no critical reports on human rights violations linked to the Olympic Games, such as forced relocations or corruption when the sports venues were built. In December 2013, Prime Minister [Dmitry] Medvedev allowed authorities to fully monitor phone and Internet communications of Olympic participants and visitors and to analyze this data for up to three years after the games have ended.

If activists inform journalists of planned protest actions linked to the games, these journalists can be marked as supporters of the protests and experience difficulty with future visa applications. We advise foreign journalists to systematically encrypt their information and communication and be extremely careful with their sources. 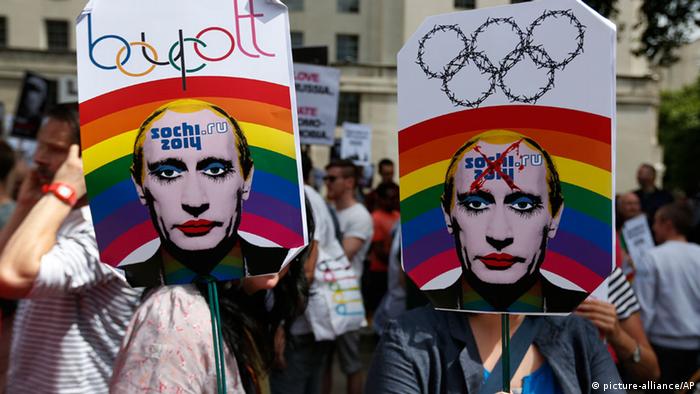 Russia's anti-gay law has caused a stir around the world; many activists are calling for a boycott of the Olympic Games

What role does the International Olympic Committee (IOC) play when it comes to adhering to human rights and press freedom?

We consider it the IOC's responsibility to monitor whether human rights are observed in the country awarded the games. The IOC can't retreat to a position claiming sports are not political. Russia - like every country presumably - has political ambitions for hosting the Olympic Games. It aims to represent itself as a modern, open-minded country. That is a political statement.

Reporters Without Borders also criticizes the IOC’s centrally organized coverage of the Olympics.

Images of the sports events will be distributed via national TV channels. It's not possible for other media to shoot their own material. In a country that suppresses the rights of homosexuals, it is possible that messages of solidarity from athletes might receive only limited coverage. That's why we are also calling on the foreign media to make use of TV images and journalistic material from Russia in a very transparent and responsible way.

Christian Mihr is a journalist and CEO of the German branch of the non-governmental organization Reporters Without Borders (since April 2012).

Usackas: 'The EU and Russia must restore trust'

The EU and Russia are sharply divided over Ukraine. Vygaudas Usackas, head of the EU delegation in Russia, told DW he hopes for frank talks at today's EU-Russia summit in Brussels. (28.01.2014)

Human Rights Watch has released its annual report examining the state of human rights in more than 90 countries. In focus was the crisis in Syria, alleged abuses of democracy in Egypt and US mass surveillance programs. (21.01.2014)

Russian President Vladimir Putin has claimed that his country's ban on gay "propaganda" does not target homosexuals. The law has sparked outrage in the West in the run up to the February Winter Olympics in Sochi. (18.01.2014)