Joe Biden likely to bring harsh criticism to Ukraine | Europe | News and current affairs from around the continent | DW | 06.12.2015

Joe Biden will likely express heavy criticism in Ukraine's capital. The United States is losing its patience with regard to Ukraine's judiciary reforms and its battle against corruption. Frank Hofmann reports from Kyiv. 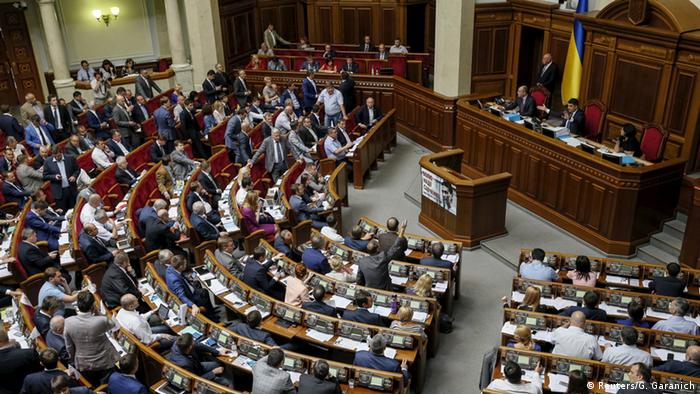 It took over a year and a half for Ukrainian President Petro Poroshenko to even begin implementing his most important campaign promise: On December 1, a new head of the anti-corruption prosecution agency was finally appointed, and now the office is ready to start working. US officials think this took far too long, and they are losing patience with Ukraine's government, especially since Prosecutor General Viktor Shokin, a Poroshenko confidant, has delayed filling the anti-corruption position. In September of this year, Geoffrey Pyatt, the US ambassador to Kyiv, took an unusual step. He tweeted - albeit in a convoluted, diplomatic manner - his demand for Shokin's dismissal.

But Poroshenko is holding on to Shokin, a man who has been accused of leading an extremely corrupt state apparatus. After Euromaidan, the judiciary holds great emotional significance for Ukrainians. Almost 100 people were killed in the revolt two years ago.

"The entire Prosecutor General's Office must urgently be reformed," a high-ranking US official demanded ahead of Joe Biden's visit to Kyiv, where the US vice president is scheduled to start holding meetings on Monday. Ukraine has a "long history of corruption," the official said, requesting anonymity to speak candidly. Biden's schedule for the visit reflects how low respect for Ukraine's leadership has sunk in the United States: The vice president will speak with representatives of pro-EU civil society groups before holding talks with politicians.

Biden will put pressure on the Ukrainian government, the US official said, and "the recently adopted anti-corruption reforms will be implemented." The vice president will probably urge Ukraine's government to force Shokin to resign. Diplomats in Kyiv are becoming increasingly distraught with regard to the placatory attitude of Ukrainian leaders.

It seems questionable that the required judicial reform will be swiftly implemented. Poroshenko's people are being advised by the European Council in Strasbourg - an institution that is not known for quick reforms. Behind the scenes, a Japanese diplomat insisted that the entire Ukrainian judiciary be thrown out. In the past, judges often acted as trustees, representing the interests of oligarchs. Japanese officials suggest that the Ukrainian government dismiss all its jurists and then start a "recruitment campaign" to put "judges with integrity" in office. This has already worked for Ukraine's new traffic police, for which Japan has donated about 1,300 cars. Since summer, the hybrid vehicles have zipped around Kyiv, blue lights flashing to give a sense of security. Above all, these actions are meant to say, "We are doing something." Now it turns out that the police patrols just showcase a proclaimed change in politics, but, behind the display, many moldy structures prevail.

This also applies to political structures. It is striking how intricately entangled they are with Prime Minister Arseniy Yatsenyuk's milieu. That is why Yatsenuk confidant Mykola Martynenko remains chairman of the energy committee in Ukraine's unicameral parliament, or Rada, although Switzerland has been directing investigations into him for at least half a year. Martynenko is suspected of transferring bribes worth millions to a Swiss account. It is doubtful that the Ukrainian prosecutor general has provided the Swiss with satisfactory support.

Conflict with Russia as an excuse?

The accused just shrug the allegations off. In other European countries, officials would break out in a cold sweat just thinking about the consequences, but German bank managers in Kyiv say Ukrainians cynically sneer at the idea of "honorable gentlemen." Martynenko himself speaks of a Russian conspiracy against him. Last Monday he stated that he would resign from parliament, but his departure has not been voted on yet.

All in all, many Ukrainian leaders use the conflict with Russia as an excuse for their failure to act. Instead of building democratic structures, the country seems to be stabilizing the old system of oligarchy, cronyism and corruption. Russian President Vladimir Putin has thus achieved his goal of halting Ukraine's establishing stronger bonds with the United States and EU. The excesses of the judiciary are reminiscent of the situation in Russia, where prosecutors are involved in shady dealings and act arbitrarily.

Ukrainian authorities are also known for violations of freedom of speech, another similarity the country has with Russia. The critical blogger Ruslan Kozaba has been in custody since February. His crime: He spoke out against the civil war in eastern Ukraine.

Apparently, the blogger was reported to authorities by a volunteer who works for the Security Service of Ukraine. The 31,000-employee SBU appears to serve as the third element in the justice system and is also traditionally a tool of oligarchic interests. But US officials say the days of standing by and watching are over: The grace period has apparently come to an end.