Some 20,000 people took part in one of the the largest-ever gay pride marches in Jerusalem. The country's LGBT community demands the government scrap a recent law that bars gay men from surrogacy parenthood rights. 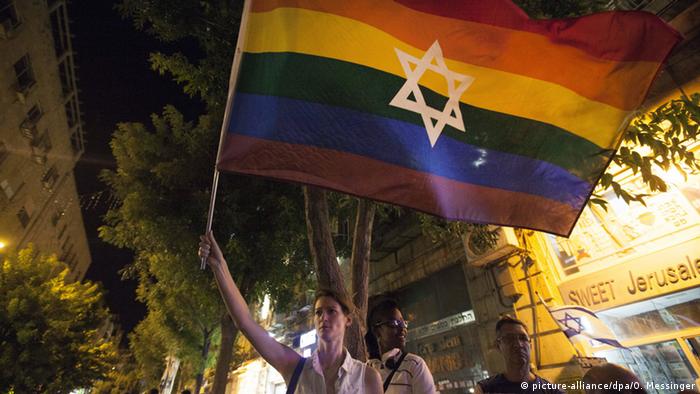 At least 20,000 people took part in Jerusalem's annual gay pride parade on Thursday under heavy police security, waving flags that said thing like "proud to be equal," and "I want to be a father," - a reference to a controversial new surrogacy law.

According to organizers there were 35,000 people in attendance, which would make it the city's largest pride celebration ever.

At least 2,500 police officers were deployed to protect the parade participants from hard-line religious groups. In 2015, an ultra-Orthodox zealot stabbed to death a gay pride marcher and injured several other people.

Organizers said the theme of the march is to honor elderly members and pioneers of Israel's LGBT community, but the new law on surrogacy parenthood rights has overshadowed the event.

The bill expanded surrogacy rights to single females, but excluded single men. At least 100,000 people took to the streets to protest the law that effectively prevented gay couples from having a child through surrogacy.

The LGBT community has criticized Prime Minister Benjamin Netanyahu, who pledged to support surrogacy for gay men only to later vote against it, reportedly under pressure from his ultra-Orthodox Jewish coalition partners.

Many multinational companies operating in Israel support the LGBT community on parenthood rights.

Netanyahu's wife, Sarah, said Sunday she would support the demands of the LGBT community.

Israeli authorities have also permitted two protest groups at the parade — the ultranationalist Lehava group and the orthodox Liba organization. The former will hold a counterrally near the start of the route while the latter will demonstrate against the event at the city entrance.

On Tuesday, Bentzi Gopstein, the founder of Lehava, called the Israeli LGBT community "terrorists" in a video message. He urged his followers to attend the protest to ensure that Jerusalem does not become "Sodom."

Jerusalem's Chief Rabbi Aryeh Stern urged Mayor Nir Barkat to remove the rainbow flags in front of two synagogues on the parade route. In a letter to Barkat, who supports gay rights, Stern said the synagogues are "symbols of the holiness of Jerusalem" and added, "Everyone is able to understand that flags which unfortunately symbolize the opposite should not be flown there."

LGBT community leaders complained of what they called "a surge in hatred."

"In the face of the hatred and fear that has led to violence and murder, we refuse to be silent," The Jerusalem Open House, which is organizing the Thursday march, said in a statement. "Despite these tragedies, we will march on with pride and demand our equal rights against all of those who try to stop and humiliate us."

The annual gay pride event in Israel commenced in 2002 under the banner "Love Without Borders" and attracted a large number of people. Last year, some 22,000 people took part in the annual parade.

Huge crowds have turned out to celebrate Britain's LGBT community at London's annual pride parade. This year, a contingent of Royal Marines was part of the festivities for the first time. (07.07.2018)

The large turnout was a show of solidarity with the victim's of last year's stabbing attack that left Shira Banki dead. The 16-year-old was one of eight people ultra-orthodox extremist Yishai Schlissel tried to kill. (22.07.2016)