Japan's 'onsen': A hot bath every day keeps doctors away

Research shows that Japanese people live longer, are healthier and have a better quality of life because of one simple habit: nearly 80% of all Japanese take a long, hot soak in a bath. 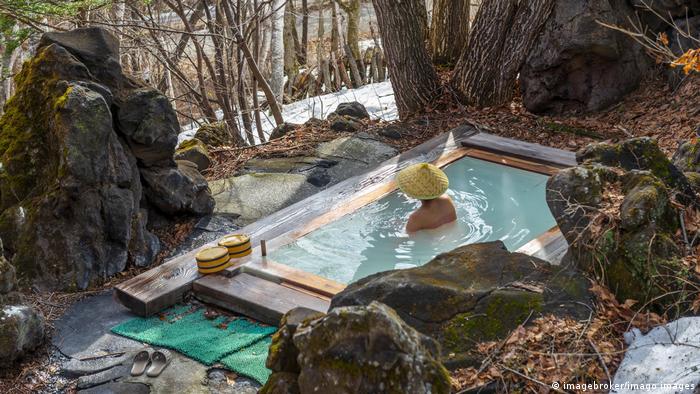 A woman bathing in an onsen at a guesthouse in Matsumoto, Japan

Shinya Hayasaka, a medical doctor and professor at Tokyo City University, has been studying the health benefits of taking a bath or relaxing in an "onsen" natural hot spring for more than two decades. And the science behind a tradition that has been elevated to something of an art form would appear to be very much on his side.

"About 20 years ago, a nurse who was providing home bathing care to an elderly patient contacted me to ask for advice," Hayasaka told DW. "She was concerned as the patient often had high blood pressure, and it was difficult to be sure that it was safe to take a bath.

"At that time, no scientific research had been conducted to answer that question, and I thought that science-based evidence was required," he said.

Hayasaka's first paper was published in The Journal of Epidemiology in May 1991. It addressed the need for careful monitoring of elderly people taking hot baths, but he soon expanded his research into Japan's culture of a daily dip.

Famously volcanic, Japan has around 27,000 natural hot springs that in ancient times gave virtually everybody access to hot water and established bathing as an important part of the national culture. Religion has also played a part, with many temples providing bathing facilities for local people as a form of charity. A number of Buddhist sutras have also recommended regular baths.

Even until the 1960s, however, most Japanese homes did not have a bathroom and families congregated at the neighborhood public baths, making it a social event. Even today, when virtually every home has a bathroom, there are still some public baths.

"There are three main health benefits of bathing regularly: heat, buoyancy and hydrostatic pressure," said Hayasaka. "Good personal hygiene and cleanliness are also beneficial for health, of course, but this can be obtained just as well by taking a shower. For the other three, though, you need to immerse yourself in hot water."

The first benefit comes from raising the temperature of the body, with Hayasaka determining that the water needs to be at least 38 Celsius (about 100 Fahrenheit).

"The blood brings oxygen and nutrition to all the cells in your body — as many as 37 trillion, by some estimates — and carries away carbon dioxide and other waste products.

"It is this boost to the circulation that is responsible for the restorative feeling you get when you soak in the bath, as if the accumulated fatigue of the day is floating away on a cloud of steam," he added.

Heat also alleviates pain, and warming the body reduces the sensitivity of nerves, which can serve to alleviate backache, stiff shoulders and other assorted aches and pains. Heat also softens the collagen-rich ligaments that surround the joints, making them more supple and relieving joint pain, Hayasaka said.

There is also truth in the old adage that a soak in a bath can help to ensure a good night's sleep, the research shows, as the body's buoyancy takes the strain off muscles and permits them to relax.

"When you are immersed in a bath, the water surrounding your body brings you the third main benefit, exerting hydrostatic pressure on every part of your body," said Hayasaka. "This is particularly beneficial for the legs and lower body, helping to alleviate swelling as the blood from the engorged vessels returns to the heart and circulation is improved."

A study that Hayasaka conducted with researchers at Chiba University focused on the health benefits to 14,000 elderly people over three years. Remarkably, the study concluded that people who take a hot bath every day are 30% less likely to require nursing care than those who bathe twice a week or less frequently.

Another study completed earlier this year by scientists in Osaka traced the well-being of 30,000 people over 20 years and determined that the risk of serious illnesses, such as a stroke or heart attack, is nearly 30% lower in people who take a bath every day.

Reduced risk of a stroke

The professor's studies indicate that a regular bath reduces the risk of a stroke or heart attack as heat causes blood vessels to dilate, reducing blood pressure and improving vascular endothelial function.

He adds that some studies have also indicated that lingering in the bath can also improve mental efficiency and reduce the likelihood of dementia, a finding that Hayasaka puts down to improved blood flow in the brain.

The average Japanese woman can expect to live to an age of 87.45 years and a man will reach 81.41 years old. A German woman will reach 83.3 years on average, while a man can expect to be 78.6 years old. The number of Japanese aged 100 or older this year exceeded 80,000 for the first time, with women accounting for slightly more than 88% of the total.

Experts from a wide range of medical disciplines concur with the Hayasaka's findings.

"The increase in peripheral circulation and parasympathetic nervous system stimulation is excellent for the health of our vascular and neurological systems," said Michael A. Persky, an ear, nose and throat specialist based in Los Angeles.

"I also agree that heat helps alleviate pain in our joints, tendons, ligaments and muscles, which results in an overall relief of tightness of the body," he told DW. "Immersion in warm water is calming to both the body and mind and I personally take advantage of our hot Jacuzzi whenever possible."

Dr. Jenelle Kim is founder of JBK Wellness Labs, based in San Diego, and a practitioner of traditional Eastern medicines.

"Soaking, particularly in herbal soaks that contain proper formulations of herbal ingredients that improve the circulation of blood and qi [vital energy], can be one of the most powerful treatments for the mind and body," she told DW. "After all, our skin is our largest organ, and upon soaking in a warm bath all our pores are opened and ready to accept and absorb the properties of ingredients such as herbs that are infused into the water."

Kim says infusions, along with elements such as magnesium, calcium, sodium, sulphates and others that occur naturally in hot spring water, can act as "a powerful method of home treatment for calming the mind, soothing muscles and joints, improving digestion and rebalancing the body overall."

Unfortunately, Hayasaka points out, the increasingly rushed lifestyles of the Japanese means that many people are taking a shower rather than relaxing in a bath at the end of a long day, with recent studies indicating that just 40% of people now take a bath every day.

And the implications of a shift away from tradition for the sake of modernity are potentially serious, he agrees, and will include rising numbers of heart attacks and strokes in Japan.