A decade of currency stability has come to an end with the rising cost of necessities and dear luxuries. But the central bank seems to be determined to keep its weak yen policy. 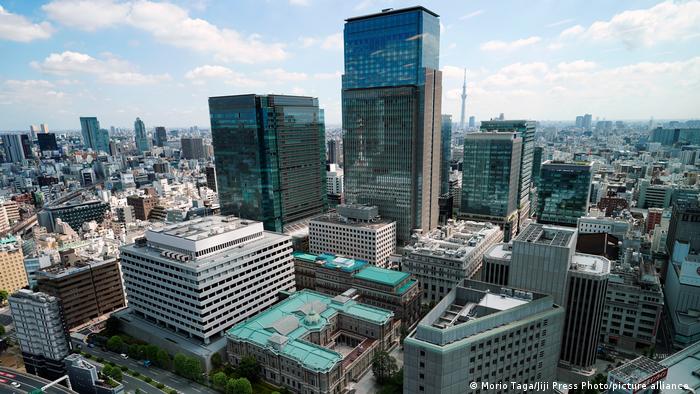 For over two years, Fumio Takenaka has been looking forward to a foreign beach holiday with her family. With the coronavirus pandemic waning and resort destinations reopening across the Pacific, she started making plans for a week in Hawaii — only to be horrified at the prices she was quoted.

Rising fuel costs have made flights more expensive as travel firms push up their prices in an attempt to claw back some of the income they lost during the forced shutdowns that hit much of the industry. But the biggest impact on the Takenaka family's vacation plans was the rapidly falling value of the yen.

The exchange value of Japan's currency, the yen, has fallen, meaning that today one would have to pay slightly less than 135 yen to buy just $1 — a level not seen since 1998.

This is also down sharply from the exchange rate of 110-120 yen to the dollar seen as recently as mid-March. Analysts are of the opinion that the yen will resume its downward slide and may soon hit the 140-yen level.

"I was shocked when I worked out the yen prices for things like hotels, a day trip to the North Shore to see the turtles, or a meal out in Honolulu. Even the airport transfers seem very expensive now," Takenaka told DW. "We have been to Hawaii a few times before, but I do not remember the prices being so high."

"The cost of food, fuel and everything else has been going up here in Japan, as well, but spending dollars seems to be beyond our budget at the moment," Takenaka said. "I think maybe this year we will go back to Okinawa instead."

The rapid decline in the fortunes of the yen has sparked alarm among Japanese consumers and companies — particularly those that are suddenly finding imports prohibitively expensive. Prime Minister Fumio Kishida and Bank of Japan Governor Haruhiko Kuroda held talks in Tokyo on Monday, during which they described the weakening of the currency as "a matter of concern."

Nevertheless, the Bank of Japan under Kuroda has reaffirmed that it will maintain its ultralow rate policy, in contrast to the central banks of the US and Europe that have been lifting interest rates to rein in inflation. As a result, analysts say, investors have been quick to sell their holdings in the Japanese currency.

"I fully expect the yen to go to 140 to the dollar," said Martin Schulz, chief policy economist for Fujitsu's Global Market Intelligence Unit.

"A weak yen policy and printing money have been core components of 'Kurodanomics,' with that easy monetary policy seen as having a positive impact on the earnings of Japanese exporters, plus bringing in more in yen terms when profits earned overseas are repatriated," he said.

Kuroda and the central bank have stuck to this policy for more than a decade, with controlling inflation and deflation the primary concern, Schulz said. Unlike other countries, however, Japan has declined to shift its priorities despite the dramatic global changes caused by the pandemic, the chaos that hit global supply chains, the associated economic downturn and now the conflict in Ukraine.

In Japan, these impacts have manifested in soaring prices, particularly for imports such as fuel and foodstuffs such as corn, cooking oils and wheat.

Japanese corporations are concerned at the fluctuations in the currency, with 45 of the 100 leading companies replying to a poll by the Asahi Shimbun newspaper saying they fear that the weak yen is badly damaging the national economy, with a further 38 responding that the effect is "somewhat negative." Only nine of the firms surveyed say the impact has been positive.

For the majority, the most serious headaches are rising costs for raw materials — Japan has little in the way of the natural resources required to feed domestic industry — and transportation costs.

"The Bank of Japan has been pushing the message that a weak yen is good for Japan, but industry and ordinary people who see prices spiking higher do not agree," Schulz said.

Optimism on the horizon

Though he fully expects the yen to continue to trend lower in the coming weeks and months, Schulz agrees that the Japanese economy has been negatively affected by an unprecedented set of circumstances that will, sooner or later, recede. The blockage of supply chains will eventually unwind, he pointed out, while inbound tourism — which is worth fully 1% of Japan's GDP — should resume in the near future.

Similarly, he said, as soon as the US economy goes into recession, which appears increasingly likely, the yen will become a more attractive "safe-haven" currency for investors and a good deal of the investments that have been lost in the past year or so should return.

"That is the Japanese government's hope, at least," he said. "They are anticipating that everything will improve over the course of the summer and that will help to stabilize the exchange rate."