Japanese scientists make breakthrough in cloning a woolly mammoth | Asia | An in-depth look at news from across the continent | DW | 26.03.2019

Cells recovered from a 28,000-year-old mammoth have shown signs of life. Although experts say the prehistoric beasts are unlikely to be walking among us soon, cell-regeneration technology could have other benefits. 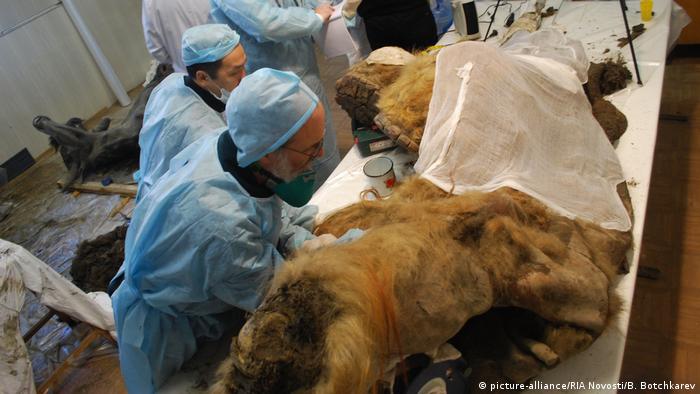 A team of scientists from Japan and Russia announced a significant step forward in an effort to bring the woolly mammoth back to life – although they cautioned that tabloid reports saying they are a decade away from a Jurassic Park-style attraction populated by mammoths and saber-tooth tigers are wide of the mark.

Read more: Should scientists bring back the woolly mammoth?

Instead, the scientists say, they hope the technology they are developing can be used to prevent species that are today on the verge of extinction from disappearing forever.

In a study published in the journal Scientific Reports, researchers announced that they have managed to recover cells from the left hind leg of a juvenile mammoth that was discovered in the Siberian permafrost in 2011. Cell nuclei from the mammoth, believed to have been roaming what is today northern Russia around 28,000 years ago, were successfully implanted in mouse cells. 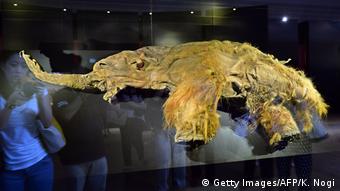 The preserved mammoth 'Yuka' on display in Yokohama

Of the several dozen specimens, five showed the biological reactions that are required immediately before cell division can begin, Professor Kei Miyamoto, a member of the study team at Kindai University, in central Japan, told DW.

"Scientists at the university have been working on this project for more than 20 years now and we have made some good progress, but this is a major development," he said.

"We have been able to confirm that the cells are able to react after being transplanted to the mouse embryos – even after such a long time – and that there is biological activity," he added.

While this is a positive development, he said, none of the samples produced the cell division that is required for a mammoth to be coaxed back to life.

Achieving cell division is the nine-strong team's next task, professor Miyamoto said. Work is continuing on the carcass of the mammoth – nicknamed Yuka – to find cells that are less damaged and more viable for the research.

"But we are still many steps away from Jurassic Park," he joked.

"The technology to resurrect an extinct creature does not yet exist, although I will not deny that it probably will in the future," he said. "We just have to continue the research."

That will come as a disappointment to those who saw headlines last year, primarily in the Russian media, predicting that a theme park featuring mammoths, species of long-extinct deer and horses, cave lions and other mammals could be operating within a decade.

Nevertheless, experts continue to scour the ice fields and permafrost of Siberia in search of specimens of these beasts that may have been sufficiently well preserved to still retain viable cells.

Questions to be answered

Miyamoto says he believes there are a number of questions that need to be addressed before the technology reaches the point that a resurrected mammoth is a reality.

"I cannot say that we should go ahead and bring these creatures back to life as there are many issues that must be considered," he said. "There are ethical issues, these animals may not be comfortable in the environment that we have today, there are countless things that have to be discussed."

"Right now, I am more interested in studying the factors that influence how animals become extinct and helping to prevent those that are in danger of dying out from disappearing," he added.

Clive Nicol, a British-born environmentalist who now lives in the mountains of Nagano Prefecture, agrees that caution needs to be exercised, but said that there are many potential benefits. 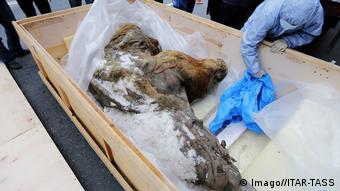 'Yuka' was transported from Siberia

"I believe that non-destructive science can be beneficial in some way or another, and it is clear that regenerating life can be positive, but I would personally prefer that we turn our attention and this sort of knowledge to endangered species that are on the Earth right now," he said.

"Up here in the mountains, there are fewer and fewer moths, bees, insects and small birds every year, or so it seems," he said, adding they are "disappearing at an increasing rate" due to the loss of their traditional habitats, interruptions in their food chains, the use of pesticides and chemicals, and more land being given over to farming.

"And then there are problems with issues such as poaching of elephant and rhinoceros in Africa," said Nicol, who in 1969 became the first game warden of the Semien Mountains National Park in Ethiopia – the first site anywhere in the world to be registered by UNESCO as a World Heritage Site.

"The work that these scientists are doing is fascinating, but I believe it is fantasy," he said.  "Indeed, I hope it is fantasy when some people start talking about bringing these creatures back to go into theme parks or zoos," he said.