Japanese minister wants to set an example by taking paternity leave | Asia| An in-depth look at news from across the continent | DW | 17.01.2020 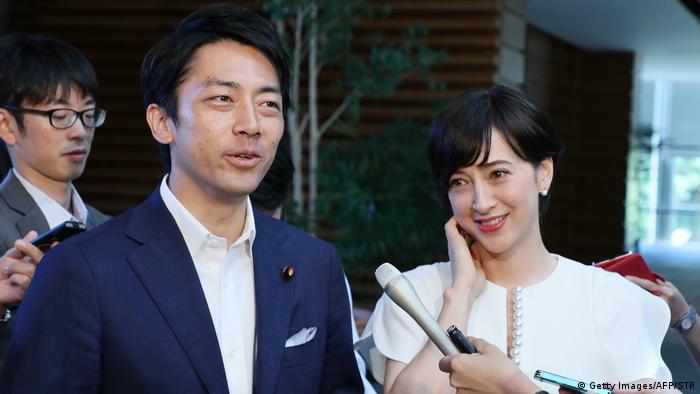 Japan's young and charismatic environment minister has announced that he will be taking paternity leave from the end of January, making him the first male member of a Japanese cabinet to take time off for the birth of a child while simultaneously promoting the government's campaign to encourage couples to have more children.

Shinjiro Koizumi, a 38-year-old rising star of the ruling Liberal Democratic Party, told reporters that he hopes his decision will encourage other new fathers to also take time off to help in raising new-born children.

"I want to take a total of two weeks off flexibly, making exceptions for important public duties," Koizumi said. According to the Japan Times, his wife, TV presenter Christel Takigawa, gave birth to a baby boy on Friday.

"The number of government workers taking childcare leave will not increase unless the government changes not only employment systems, but also the workplace atmosphere," Koizumi added in a subsequent meeting at the ministry to discuss reforms to Japan's notoriously demanding work culture.

"I hope my decision will encourage other people to not hesitate to take child-care leave," said Koizumi. "My biggest wish is that the day will come when our society no longer deems a politician's child-care leave as news."

Koizumi is widely considered a future Japanese prime minister, in part because his father, Junichiro Koizumi, was also prime minister. He said he intends to monitor developments at his ministry by working from home, but that he will still go to his office when required for the next three months after the birth.

His announcement was applauded by other members of the government, with Chief Cabinet Secretary Yoshihide Suga echoing the hope that Koizumi's paternity leave will encourage more men to be involved in raising their children.

"As a young politician in the government, I think Koizumi will be very conscious of trying to push Japanese society forward and that he thought this would be a good opportunity to demonstrate to other fathers that they should not be shy about taking paternity leave," said Makoto Watanabe, an associate professor of communications at Hokkaido Bunkyo University.

"There is still tremendous social and workplace pressure on men not to take paternity leave, so he is clearly trying to change that attitude."

"It's the same in my office; nobody wants to be the first father to take time off out of concern about what other people will think or say."

Japanese law grants generous provisions for parental leave, including up to one year off from both parents and a further six months if a place at a nursery is not available for the child. The reality, however, is that social pressure means that very few people take the leave to which they are entitled.

Back at the office

Many company employees are quickly back at their desks because they feel guilty that their colleagues are expected to do their work while they are away and that they are being "disloyal” to the company. Workers give similar reasons for not taking all the paid holidays to which they are entitled every year.

"I think Koizumi is emerging as the leader of the younger generation in Japanese politics and is very aware of how his words and actions can have an impact on society here," said Hiromi Murakami, a professor of political science at the Tokyo campus of Temple University.

"There is so much pressure for new fathers not to take time off so he's trying to set an example that even a busy member of the cabinet can take time off," she said. "But I'm afraid it's still going to take a long time to change attitudes."

The national government and local authorities have implements numerous initiatives designed to encourage more people to have children, including subsidies for families with three children or more and the opening of more kindergartens, but the national birth rate is still declining.

Watanabe says that no matter how many politicians try to the government's campaign to raise the birth rate, ordinary people face a fundamental problem.

"Politicians are wealthy; most ordinary Japanese are not," he said. "I think that most Japanese people love children and would like to have a big family, but the basic problem is that it's just too expensive for them to have one or, at most, two children. That's sad, but it's also worrying for the future of the nation."