Japan: Restaurants use elaborate fake plastic food displays to heat up competition | Asia | An in-depth look at news from across the continent | DW | 07.06.2021

Detailed and incredibly realistic replicas of meals have been on show outside Japanese restaurants for more than 100 years. An establishment's success can depend on how well its dishes look in the window. 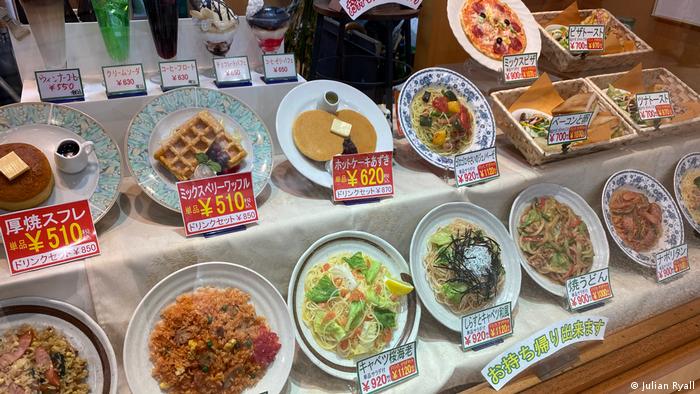 Bowls piled high with ramen, dishes of fried rice, plates of perfectly prepared steak, spaghetti, salad or pizza in Japanese restaurant windows are enticing to the eye and can whet the appetite of the pickiest of eaters.

They may be enough to set taste buds tingling, but anyone who attempted to tuck into one of these meals would be in for an unpleasant surprise; they are made entirely of plastic and painstakingly painted to be utterly realistic.

Japan has a deserved reputation as a paradise for food-lovers, giving the world cuisine such as sushi and noodles, "okonomiyaki" savoury pancakes, "yakitori" grilled chicken, "shojin ryori" vegetarian dishes and countless others.

It has also proved, down the years, to be a voracious adopter of foreign foods, producing Japanese versions of dishes that are native to France, Italy, Spain and every other corner of the world.

The downside of all that choice in Japanese cities, however, is that a successful restaurant has to stand out from the competition. This is why life-like replicas of dishes that are available within the restaurant are displayed in the window.

The very first "sample models" were made by a manufacturer of anatomical models from Kyoto named Soujiro Nishio. His earliest efforts were made of wax and began appearing in the windows of restaurants around his home town around 1917.

The concept caught on, encouraged by the fact that most restaurants of the day did not use menus, and a number of craftsmen began to similarly create models. 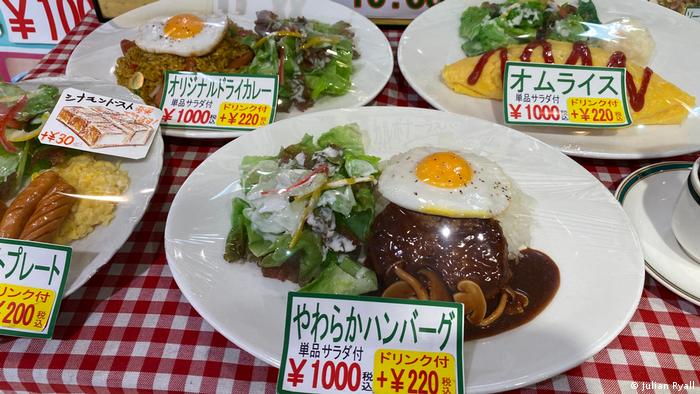 It looks good enough to eat, but the taste will surely be disappointing

Takizo Iwasaki is credited with helping the industry take off, setting up "Iwasaki Be-I" plastic food maker in 1932. To this day, it remains the biggest name in the business and provides as much as 60% of all plastic food sold in Japan.

"The company was originally set up in Osaka and grew steadily over the following decades," said Yuta Kurokawa, a spokesman for the company, told DW.

Iwasaki Be-I soon expanded into the lucrative Tokyo market, Kurokawa said, and was able to retain its position as the market leader through the use of innovative materials and techniques.

How do they make realistic food replicas?

The process of creating the perfect plastic meal is painstaking. First, a restaurant provides a real dish, which is then "deconstructed" by Iwasaki Be-I's technicians and broken down into all its individual elements. Some everyday ingredients in the dish may be in stock, but just as often the real food is used to create a silicone mold.

Liquid plastic is then carefully injected into the mold, making sure that no bubbles or imperfections are left, and the "food" is "cooked" at 180 degrees before being left to cool.

Practiced staff use a magnifying glass to examine every element of the dish, with any component exhibiting the slightest imperfection rejected.

The next stage of the process is just as exacting, with the countless colorless fish, fruit and vegetables rendered realistic. Teams of painters use delicate sprays to turn a spider crab the required shades of orange, turn all the elements of a vegetable and fried rice dish the correct color and mottle a slice of prime beef.

The varied colors of a "tai" sea bream are a challenge, but a block of plain white tofu is more straightforward.

The final stage in the process is the precise arrangement of the completed ingredients on a plate or, in the case of what appears to be simmering ramen noodles, in a bowl.

Some designs are even more creative; ice cream must appear to be melting on a hot pancake and lots of pasta restaurants want their designs to incorporate a fork that hovers above the plate with spaghetti twisted around it.

With competition increasing in the industry, manufacturers have branched out into new areas for their products.

Iwasaki Be-I and two other makers opened stores in the Kappabashi district of Tokyo, a long-time location for restaurant supplies from neon signs to tables, industrial stoves, plates and specialist knives. And, of course, sample meals made of plastic.

Those same meals have proved irresistible to foreign tourists looking for a truly unique souvenir.

Producers do a roaring trade in miniaturized versions of some of its ingredients or entire dishes like iced doughnuts, fried eggs, a slice of chocolate cake, a bunch of grapes - that are sold as key rings or mobile phone straps.

"I think spaghetti dishes are probably our most popular designs," Kurokawa said, although he admitted that business has been bad over the last 18 months due to the coronavirus pandemic.

"Orders and sales have definitely gone down and we understand that it is very difficult for restaurants in Japan at the moment," he said. "The government is asking restaurants and bars to shut early and people not to go out so much, so there are fewer orders for new models."

"But the vaccine is coming out now and we are hopeful that more people will soon be able to eat out again," he said. "And when that happens, restaurants that have been quiet for more than a year will want to win back their customers."