Tokyo made the decision after South Korean authorities failed to remove a statue dedicated to victims of sexual slavery. Japan donated money to support surviving "comfort women," but stopped short of an official apology. 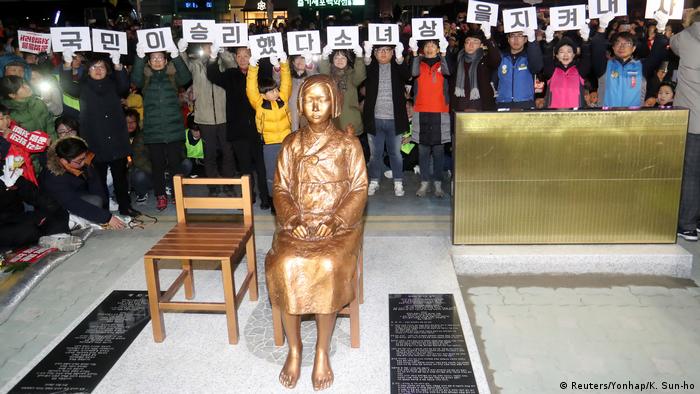 Japan announced on Friday that it had recalled its ambassador to South Korea and temporarily suspended bilateral economic talks. The move came in response to a statue dedicated to "comfort women," a name given to the victims of wartime Japan's system of sexual slavery, outside the Japanese consulate in the South Korean city of Busan.

"We have repeatedly asked South Korea to deal with the resolution of this issue appropriately, but the situation has not improved, so we have taken this action," said Chief Cabinet Secretary Yoshihide Suga said at a press conference, referencing the statue installed by local activists in late December.

The Japanese government has long denied direct involvement in systematic sexual slavery, and both Prime Minister Shinzo Abe and Defense Minister Tomomi Inada have insisted the women were prostitutes, despite the testimony of prominent victims like Indonesian-born Australian Jan Ruff O'Herne.

After decades of bitterness, Japan and South Korea agreed to settle the issue in December 2015 when Tokyo said it would donate $8.6 million (8.12 million euros) to a foundation set up to assist Korean survivors. But both activists and survivors were denied a long-sought official apology.

Seoul expressed its consternation with Tokyo's decision to recall its ambassador, suspend talks, and pull its consul-general in Busan.

"Even if there are difficult issues, the governments of both countries must continually develop South Korea-Japan relations based on a relationship of trust," said a statement from the foreign ministry.

South Korea and Japan may have officially settled their disputes over so-called "comfort women" in 2015, but expatriate communities are involved in a bitter legal fight in Australia. (15.12.2016)