Japan broaches delicate subject of a future female empress | Asia | An in-depth look at news from across the continent | DW | 28.11.2019

With the royal family running out of male heirs, discussion in Japan has turned to rewriting laws to permit a woman to assume the throne – although traditionalists remain firmly opposed to the idea. Julian Ryall reports. 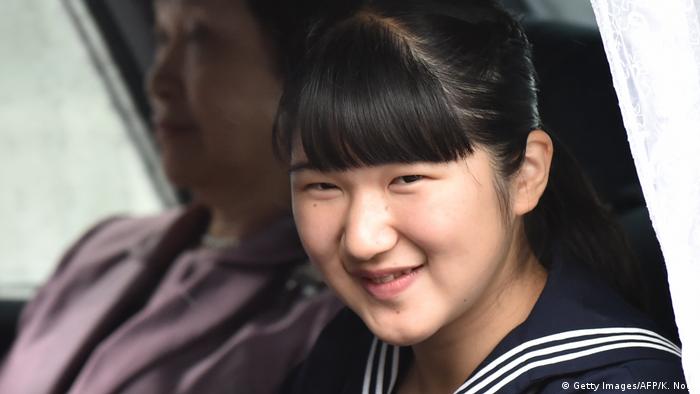 A senior member of Japan's ruling Liberal Democratic Party (LDP) has broken rank with the government to make the bold suggestion that a future emperor could come from the female line of the imperial family.

Akira Amari, chairman of the party's committee on tax and a close ally of Prime Minister Shinzo Abe, made the comment during a recent appearance on a television news program – reigniting a debate on the future of the nation's monarchy just as newly crowned Emperor Naruhito completes the rituals to mark his ascension to the Chrysanthemum Throne.

The Emperor and Empress Masako on Wednesday visited the tomb in Nara Prefecture of the Emperor Jinmu, the legendary first leader of Japan who is believed to be descended from the sun goddess Amaterasu and who took the throne in 660BC. Naruhito, who became emperor in May, after the abdication of his father, has a daughter but no male heir and his accession has triggered a debate over the future of the world's longest-lived hereditary monarchy.

At present, there are a mere 18 members of the imperial family and only seven are in their 30s or younger. Given that Naruhito has a daughter, Princess Aiko (main picture), but no male heir, the crown is likely to subsequently pass to his nephew, Prince Hisahito, who is 13 years old. Should the young prince fail to have a son in the future, the imperial family will run out of male heirs, which has prompted an examination of the rules on accession.

Under the terms of the Imperial Household Law, only male descendants from the male line of the imperial family can become emperor in Japan. And while there have been female emperors in Japanese history, the most recent was Empress Go-Sakuramachi, who ruled from 1762 to 1771, and the relevant laws have since been altered.

There has never been an emperor from the female line of the imperial family, as Amari is suggesting.

"To say that there cannot be an empress of Japan is simply inconsistent with everything that Prime Minister Abe has said about women's empowerment in society and the need for them to 'shine,'" said Hiromi Murakami, a professor of political science at the Tokyo campus of Temple University.

"Lots of other countries, for example, have passed laws about women's involvement in politics and have achieved better results than Japan," she told DW. "Abe's government has passed such laws, but nothing has changed. And it's the same with the imperial family; conservatives are strongly attached to the idea of a male-only lineage."

That also flies in the face of public opinion, Murakami points out, with polls consistently indicating that between 70 and 80% of ordinary Japanese people are in favor of changes in the laws so that a woman can become empress.

In favor of Princess Aiko

"Most people feel that there is nothing wrong with Princess Aiko becoming empress in the future," Murakami said. "She is only 17 now and has grown up in the imperial family, so by the time she takes over the throne she would be experienced and ready."

Given the looming crisis in the imperial family, other ideas are being put forward for how Japan might avoid running out of heirs. And while opposition parties might be in favor of an empress, they are vastly outnumbered in the political world by traditionalists.

Earlier in November, a conservative group from within the LDP submitted a proposal that would potentially solve the problem without having to resort to permitting a woman to sit on the throne. The suggestion is for branches of the imperial family that lost their royal titles immediately after Japan's defeat in World War II, when the Allied forces were trying to reduce the influence of the imperial family on everyday life, be reinstated as part of the nation's monarchy.

A total of 11 branches of the imperial family tree were lopped off in 1947, and reinstating those families' royal credentials would provide a far larger pool of potential emperors in the future, the proposal claims.

Conservatives are firm in their convictions and continue to resist change on the grounds that the imperial family is safe for at least one generation.

"The suggestion put forward by Amari to allow an emperor from the female line is problematic because it could permit a bad man who marries an empress to misuse that position," said Yoichi Shimada, a professor at Fukui Prefectural University.

And there is a precedent for that very scenario, he claims. Around 1,000 years ago, the Taira clan of samurai attempted to get one of their sons to marry a princess who would later go on to become empress, Shimada said, suggesting that an outsider could gain influence and wealth by marrying into the imperial family.

"The best solution is the proposal for branches of the imperial family that lost their status back in the 1940s to be reinstated, which would provide the palace with plenty of male heirs in the years to come," he added.