The millions of plastic bags given to shoppers in Jamaica pose a major environmental hazard as they litter the streets or are burned in the trash. But one poor farming community is turning the trash into treasures. 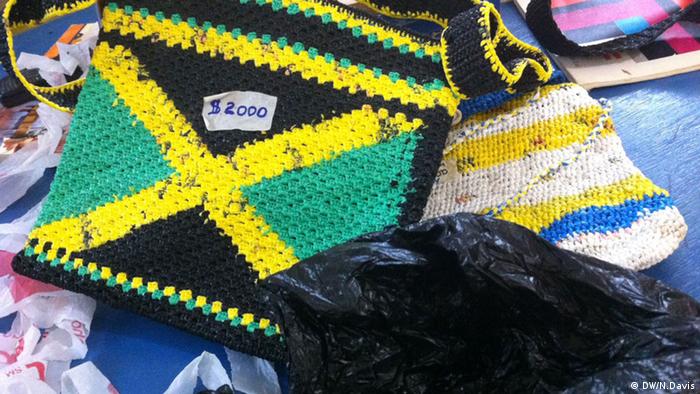 In Jamaica, every time you go to the supermarket, to a corner shop, or any other kind of store, your item gets put into a plastic bag. But unusually, many of them aren't transparent with a store's slogan clearly printed on them. Instead, they're completely black and locals call them "scandal bags." Made of black polyurethane, their purpose is to hide what you've bought from prying eyes.

The problem is that shoppers aren't asked whether they want a bag at all. They buy their groceries and, after they've unpacked everything at home, they're left with a mountain of plastic bags. 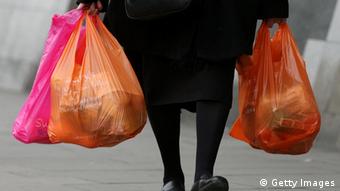 Jamaica isn't the only country to face the plastic bag plague; here, a a shopper is shown in England

It's been estimated that the average person uses more than 300 bags a year on the Caribbean island. Most of them end up in the dump or get tossed on the roadside when there are no trash cans around.

People also burn them - in Jamaica, it's still quite common to set fire to household waste. This not only causes forest fires, but the resulting smoke contains toxic hydrogen cyanide, which can enter the food chain. In addition, the greenhouse gas carbon dioxide is created during production and incineration of the bags.

Bags that aren't burned create serious problems as well, because they can block waterways. Mosquitoes then breed in these waterways and go on to spread dengue fever in the country.

Crocheting workshop at the end of the world 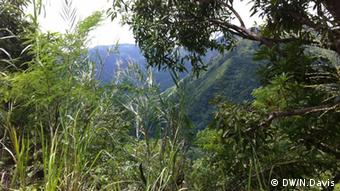 But now, a women's group has come up with a creative solution to the plastic problem. Participants make bags out of discarded plastic. Their "headquarters" are located in a remote area of the island, with the only there access by way of a four-wheel-drive jeep.

Along the road, coffee plants hug the steep mountainsides. At the end of a bumpy, windy path - at about 4,000 feet - is the workshop where the women meet up. It's also an Internet café, library and community center all rolled into one. The women often gather around a table to crochet together - turning their craft into an environmentally-friendly project that pays the bills for this poor rural community.

Kadeen, Kadianne, and Dorett make intricate crocheted bags out of an array of different colored plastic.

"Here, you've got one in black, gold and green - Jamaica's colors," Kadianne says, presenting one of the self-made bags. "Sometimes, it takes weeks to make one, sometimes days, depending on what you're doing. We found out how we can use these bags to make real money."

A change in awareness 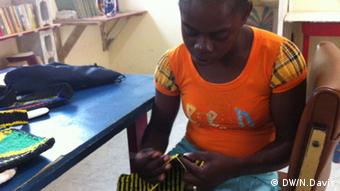 The scheme is run by the The Blue Mountain Project. The coffee produced in the area is among the most expensive in the world - but because most of the farms are small-scale and inefficient, the community is poor. The re-purposing of plastic for the crocheted bags is helping to improve the situatuion.

Euton Rodney is the project's local coordinator. "People can't believe it's a scandal bag when the women are finished with it," he says. "The ladies can earn money and turn the garbage into something really useful."

The bags sell for $15-25 each to tourists who come into the area to hike around. The project not only makes a difference for these women's livelihoods, but it also helps the environment: Kadeen says people are now keeping bags rather than throwing them away. 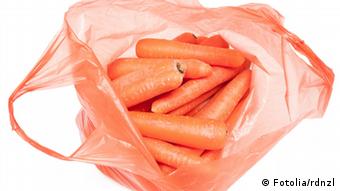 "Now that we have started to use the bags to make new ones, people are more aware," Kadeen believes. "I find people packing up the bags, especially the colored ones that they know we can't get out here. They save them and when they see us, they give them to us so we can use them for crocheting."

While the United Nation's Caribbean Environment Program is looking at how to tackle the impact of plastic bags on marine life, these women have started to deal with the issue further inland on their own.