EU wants plastic out of marine stomachs | Europe | News and current affairs from around the continent | DW | 05.11.2013

Marine biologists are finding more plastic particles in the stomachs of dead birds and fish. The EU plans to help by reducing plastic bag use by 80 percent. A few member states have already provided the blueprint. 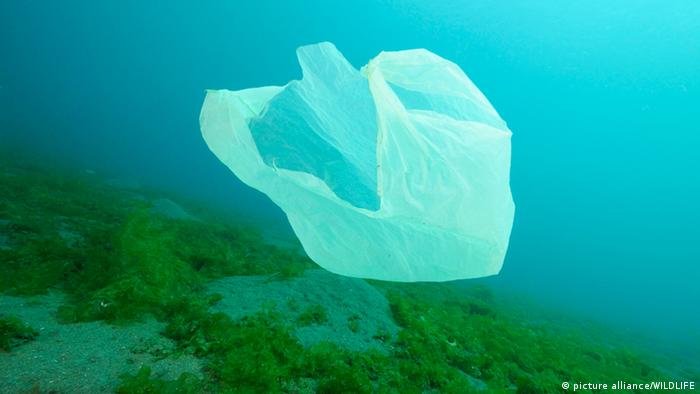 "The problem so big that we can't even measure it," said Benjamin Bongardt, an expert in waste at the Nature and Biodiversity Conservation Union Germany (NABU). No one can say how much plastic is in the oceans, he told DW - only that it's more than nature can handle.

For more than ten years, marine biologists have been trying to assess marine pollution by examining dead birds. On average, they find 31 plastic particles in the stomachs of the birds - and the number of particles is rising. Estimates based on these numbers show that there are 18,000 plastic particles floating on each square kilometer of water surface. Some of them are microscopically small, others intact plastic bags.

Many plastics dissolve only after 450 years, says NABU expert Bongardt. A major part of the pollution comes from plastic bags.

"80 percent of all bags come from land, and not from the sea. That means plastic bags are not littered from ships, but mainly come from tourists, residents via the coastline or rivers, or are blown by the wind into the sea," said Bongardt. Very thin plastic bags in particular, which are often thrown out after a single use, tend to be blown from dumps into the sea.

The EU commission wants to pull the brake and press member states to reduce the usage of plastic bags. According Janez Potocnik, the EU's environment commissioner and a Slovenian politician, there are 100 billion plastic bags used in the European Union every year. "More than eight billion plastic bags end up as litter a year, causing enormous environmental damage - particularly for fish and birds that end up swallowing particles of these plastics," Potocnik said. On Monday (04.11.2013), he presented a draft for a new packaging directive. According to that directive, member states will be obligated to reduce the usage of plastic bags. 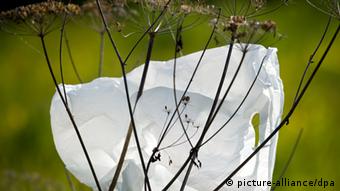 In the future, Potocnik hopes that 80 percent of such bags will disappear

The plastic bag problem varies among EU countries. Danes and Finns use just four bags per capita each year, while in Poland, Portugal and Slovakia, annual usage per capita is more than 450 plastic bags. Germans tend to use 70. "Some member states have already achieved great results in terms of reducing their use of plastic bags," said Potocnik. "If others follow suit, we could reduce today's consumption in the EU by as much as 80 percent."

It is because these differences are so huge that Potocnik wants leave plastic reduction measures to the individual member states. In exceptional cases, Potocnik wants those countries to ignore internal market regulations if necessary.

"Member states should also obtain the right to introduce market restrictions, all the way up to a ban on plastic bags - something that wasn't possible under previous legislation," he said.

A ban is unpopular

It is not clear if it will come to that. The draft of EU commissioner Potocnik needs to be approved by EU parliament and the Council of the European Union. On the one hand, a ban is unpopular in countries where the use of plastic bags is high. On the other, countries with a strong plastics industry - like France and Germany - will press to water down the draft.

Dagmar Roth-Behrend, EU parliamentarian for Germany's Social Democratic Party, criticizes that Commissioner for the Environment Janez Potocnik wants leave it to member states to reduce the use of plastic bags. The commissioner, she says, buckled ahead of the confrontation.

"If I'm serious as a commissioner for the environment, then we need a standardized solution for Europe. If I think there is a problem, I have to address the problem," Roth-Behrend said.

NABU's Benjamin Bongardt, however, welcomes the flexible approach. It is important to avoid long discussions - that countries start to tackle the pollution of the seas. Bongardt refers to the Irish example, one he hopes other countries will follow. Ireland has steadily increased the price of plastic bags. Currently, there is a tax of 22 cents per bag.

"The effect is that the number of plastic bags has been reduced by ninety percent, and every citizen uses just 18 bags per year. Taxpayers' money is used to finance educational work," Bongardt said. 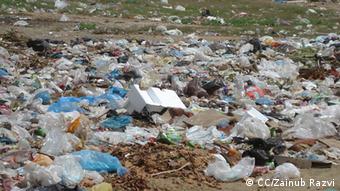 Wind often blows plastic bags from dumps into the sea.

The waste expert from NABU sees the EU as a locomotive for global marine protection. The problem, of course, reaches far beyond Europe's borders. In emerging countries, prosperity is on the rise - and with it, the use of plastic goods. In some countries, the rivers and lakes are literally stifled by plastic bags and bottles. Much of this ends up in the sea, sometimes after years, sometimes after decades.

By comparison, Europe's problems are small, Bongardt says. "Of course, Europe can't solve the global problem. But it can lead by example and say, 'We're trying to reduce the use of plastic in industrial countries.' And maybe some emerging countries will follow that example."

For more than 20 years, Germany's famous Green Dot system has been a leading light for recycling worldwide. Now, instead of letting private companies run it exclusively, local utility companies want to get involved. (15.07.2013)

Despite advances in cleaner fuels on land, ships continue to spew out massive amounts of toxic exhaust linked to environmental and health dangers. Activists want the shipping industry to clean up its act. (31.01.2012)