Shipping asked to clean up its act | Environment| All topics from climate change to conservation | DW | 31.01.2012

Despite advances in cleaner fuels on land, ships continue to spew out massive amounts of toxic exhaust linked to environmental and health dangers. Activists want the shipping industry to clean up its act. 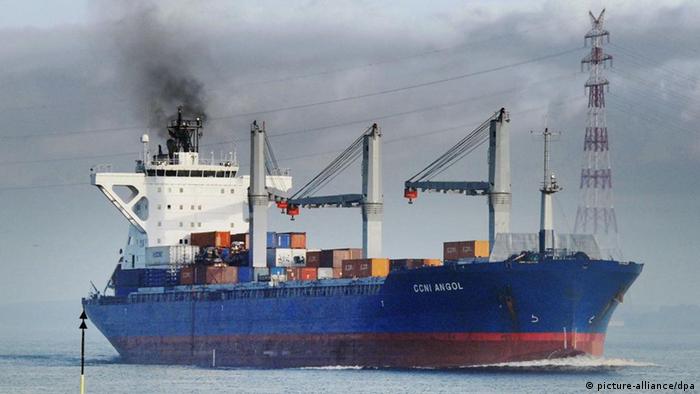 Ships remain big polluters because of the fuel they burn

Thanks to increasingly strict rules, traffic exhaust is cleaner than ever. Unfortunately the same cannot be said for ships. Giant cargo ships continue to blow unfiltered toxic soot into the air as they crisscross the world's oceans and seas.

The European Union has found that ship emissions were to blame for 20 to 30 percent of all particulate matter found in coastal regions.

Scientists have linked these tiny particles to cancer, cardiovascular diseases, asthma and even global warming. Environmentalists and health experts are now calling for big changes in the shipping industry. They want the kind of restrictions on land-based vehicles and industry to apply to ships.

The trouble is the kind of fuel that's used to power ships. It's the residual oil left over from the refining process for higher quality fuels. It's so toxic that if it were not used up by ships, the refineries would have to pay big bucks to dispose of this hazardous waste.

The sulfur content of this residual oil is 3,500 times higher than in the diesel used by commercial trucks. With about 50,000 merchant ships plying the world's waters, their emissions contribute significantly to the acidification of the oceans.

Winds also blow the soot from these ships into the Arctic, turning the ice black. The now-dark surface absorbs the sun's rays better, warming the ice more quickly. Scientists believe that Greenland's glaciers have, in particular, melted at a faster rate because of this pollution.

To make matters worse, the exhaust from this low-grade fuel is not filtered.

Dietmar Oelinger, a transportation expert at Germany's Nature and Biodiversity Conservation Union (NABU), is calling on shipping companies to stop using this residual oil and install exhaust gas and soot filters on their ships.

"On land this has long been the norm. It's possible too on the high seas," he said.

But environmentally friendly marine diesel costs some 40 percent more than the fuel commonly used now. The companies are reluctant to agree to pay these extra costs voluntarily.

Oelinger says that when you take into consideration the medical costs precipitated by the pollution - which the companies don't have to pay themselves - the cleaner fuel is a good deal for society as a whole.

The International Maritime Organization (IMO), the United Nation's agency responsible for setting international standards for the shipping industry, already has a plan to do away with the use of residual oil, but the new rule won't kick in until 2020. 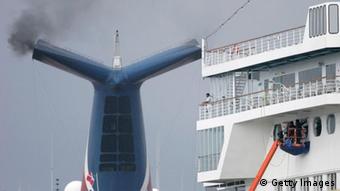 Ship exhaust is much dirtier than that of cars and trucks

That may not be soon enough for those suffering from ships' exhaust. Some port cities have taken the matter into their own hands and made the burning of residual oil in their harbors illegal.

In Europe there is a push for a ban on such fuel in the Mediterranean Sea. Such a ban already exists in the North Sea and Baltic Sea.

Environmentalists say it's time the shipping industry took on its fair share in the fight against climate change: With production becoming increasingly globalized, shipping traffic and its emission are only expected to increase.

Experts would like to see the heavily-damaged Italian cruise liner Costa Concordia refloated. They say it would be the most cost effective solution, but also the most complicated. (20.01.2012)

A government-commissioned report warns that Germany's plans to put 1 million electric cars on the road this decade may do less to curb emissions than tightening efficiency standards for gas guzzlers. (30.01.2012)

Airlines could profit from carbon scheme

International airlines have railed against the inclusion of aviation in the European Union's emissions trading scheme, but an industry study says US carriers could make billions off the system thanks to free permits. (13.01.2012)

Fighting different types of pollution in order to relieve the environment and improve our quality of life.

We need to talk!