What happens to the wreck of the Costa Concordia? | Science| In-depth reporting on science and technology | DW | 20.01.2012

Experts would like to see the heavily-damaged Italian cruise liner Costa Concordia refloated. They say it would be the most cost effective solution, but also the most complicated. 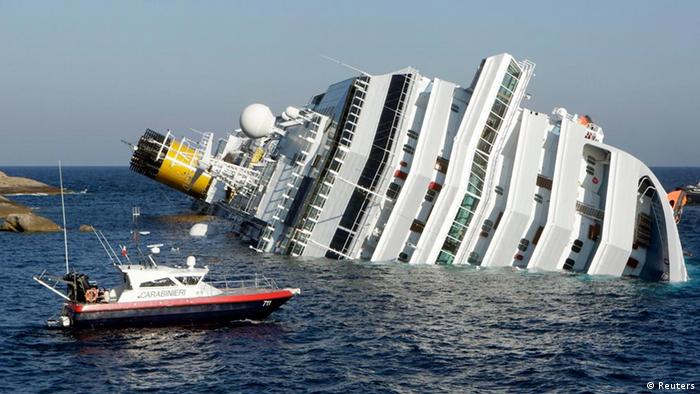 Three options are left for the wrecked cruise ship

The cruise ship, Costa Concordia, ran aground on rocks off the Tuscan island of Giglio a week ago, but what will happen with the wreck in the weeks to come is still unclear.

Perhaps it will be repaired, or maybe it will be cut into pieces and hauled away to a junkyard.

"Both options are possible," says Stefan Krüger, a ship construction professor at the Technical University of Hamburg-Harburg in northern Germany.

Whether or not it is even possible to get the giant luxury liner afloat again depends on a number of factors. The main problem is closing the 70-meter long gash in the hull of the ship. There are also countless smaller openings which need to be welded shut.

"The ship first has to be sealed before it can be pumped out and raised," says Krüger. That would be a tremendous challenge, but feasible, he adds.

In 1987, when the ferry Herald of Free Enterprise ran aground on a sandbar off the coast of Belgium in nine meters of water, listing strongly to one side, it was nevertheless possible to get the ship afloat again. Engineers at the time drove 16 concrete pylons into the seabed, which the salvage company used to mount huge cranes. The wreck was finally pulled upright and towed off the sandbar. 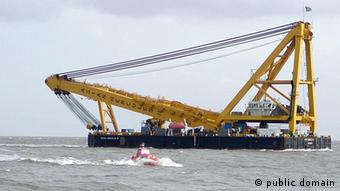 The ship could be refloated with the help of huge cranes

A similar method could be used for the Costa Concordia. A salvage team could ram huge pylons into the seabed on the hull side of the ship and giant straps could pull the ship into an upright position. Special air cushions could be arranged around the hull to provide added buoyancy.

This would only work, however, if a survey of the wreck showed that the ship was stable enough to be towed into deeper water before it was heaved into an upright position.

The stress on the materials would be enormous. The Costa Concordia is over 290 meters long (860 feet) and weighs more than 114,000 tons. By comparison, the Herald of Free Enterprise was just half as long and weighed just 8,000 tons.

"Basically, the ship could eventually be put back into service," he says. But he doubts whether anyone would be willing to take a cruise on it. Krüger thinks that it is more likely the Costa Concordia will be scrapped.

Chopped up, piece by piece 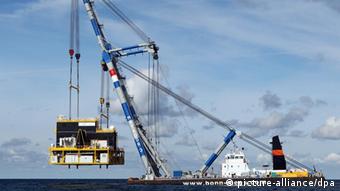 Pieces weighing thousands of tons would have to be lifted

If the ship, however, is too damaged and instable to refloat and tow away, it will be taken apart, piece by piece. Special steel cables covered with industrial diamonds would saw the ship into chunks weighing several thousand tons each. The sunken Russian submarine Kursk was dismantled using this method 12 years ago.

The individual pieces would be heaved onto barges by special cranes and taken away. Taking the ship apart, however, would take a lot longer than plugging all the holes, setting it upright and towing it away.

Dismantling the cruise liner, says Eyk-Uwe Pap from the salvage firm Baltic Taucher in Rostock, would take "one to three years."

Before cutting it up, all the heavy oil would have to be pumped from the ship and that sounds easier than it is. Due to the current 10-degree water temperature along the Italian coast, the ship's fuel oil has the consistency of tar and would have to be heated in an elaborate process before it could be pumped out of its tanks.

Which of these methods will ultimately be used is not clear, but a decision will be made in the coming days. The weather, too, plays an important role. Poor conditions, with wind and waves cold move the ship, which would be disastrous.

The most important thing, Pap added, is to stabilize the wreck in its current position. If it were to slip off the rocks into the open sea and sink, salvaging the ship would become even more complicated and more expensive.

If that happened, says ship-building professor Krüger, the Costa Concordia would not be salvaged and instead left to rot at the bottom of the sea.

Divers are resuming the search for survivors after the Costa Concordia cruise liner shifted on Wednesday. Meteorologists have forecast strong winds in the area for later on Thursday. (19.01.2012)

When is a captain allowed to abandon ship?

"The captain is last to leave a sinking ship": A legally binding rule, or a nautical myth? Last Friday's cruise ship accident off the coast of Italy has once again raised the question. (19.01.2012)

The death toll of the cruise ship Costa Concordia, which ran aground at the weekend, has risen to 11 after divers found five more bodies in the wreckage. (18.01.2012)

Costa Concordia passengers were ordered back to their cabins