Just 1 percent of plastic is currently made of a substance other than oil. But, plastics produced from renewable sources are on the rise. Get ready for T-shirts reinforced with orange peels and crab shells. 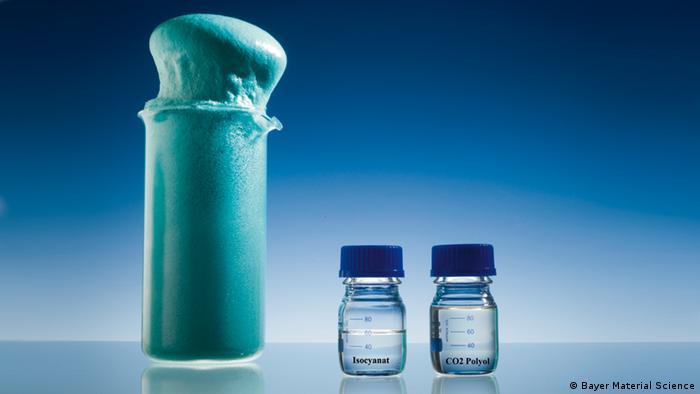 At K 2013, the annual rubber and plastics trade fair in Düsseldorf, Manfred Rink pointed out a modern take on upholstered furniture, the foam cube from his employer, Bayer Material Science.

What makes his cube unique, however, is that 20 percent of the cube is comprised of carbon dioxide recovered from the exhaust of a brown coal-fired power plant.

"The 'C' in CO2 is very interesting for chemists," Rink told DW.

Carbon is the primary element in oil - and therefore, a key ingredient in plastics, which are also made from oil. That connection led scientists to consider ways of recovering the carbon in carbon dioxide as the basis for new materials.

"We've come much closer to that dream in the last few years," the engineer told DW. "Together with the RWTH Aachen University, we've made huge advances in primary research."

For Rink, as well as his colleagues at the university, the initial challenge was breaking CO2 apart in a way that did not require much extra energy. Reducing CO2 by burning fossil fuels is a non-starter, of course, and by limiting the energy invested, such an undertaking becomes environmentally and financially feasible. 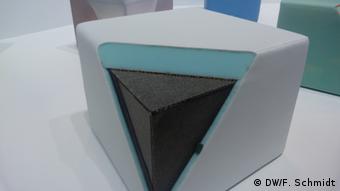 Take a seat, please: cube made of 20 percent carbon from CO2

The "economy of energy" has been achieved through enzymes, or proteins, found in selective bacteria. Requiring temperatures of just 30 degrees to 40 degrees Celsius (86 to 104 Fahrenheit), the enzymes begin catalytic conversion. Such temperatures can be reached in an environmentally friendly manner by utilizing so-called "process heat," or the warmth that results naturally from just about every industrial activity.

The group's work has been developed to the point that, in just a few years, they plan to bring foams made in this manner to the market.

"Our vision is, from 2015 on, to manufacture a wide range of preliminary plastic products whose carbon has been derived from CO2," Rink said.

Researcher Tobias Gärtner at the Fraunhofer Institute for Interfacial Engineering and Biotechnology has taken a similar approach. His work focuses on manufacturing plastics from different waste products, such as lignin, a residual chemical compound that results from wood processing.

"We break lignin down into smaller parts, through a combination of biotechnology and chemical catalysts," the chemist told DW.

The results are monomers, or individual molecules, that are then turned into polymers, or long chains of hydrocarbons - the basic components of plastics. 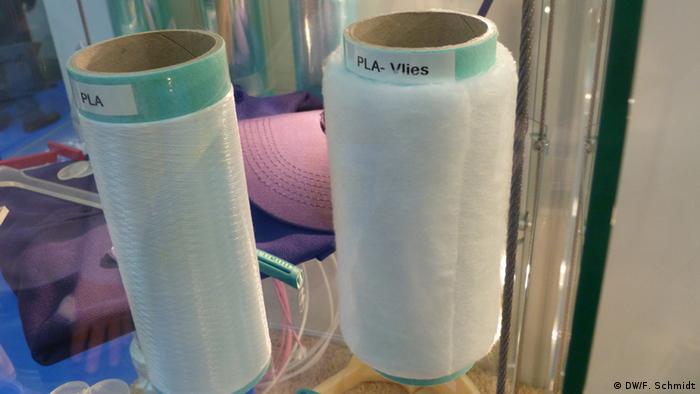 Polylactic acid was the primary ingrediant in these rolls of plastic

Gärtner's raw materials can include orange peels or terpenes, an aromatic hydrocarbon found in sap of a softwood tree, for example.

"Nature has already given these molecules a defined structure that can be filtered out," he says. "In Europe, they're produced at a rate of thousands of tons per year."

Waste produced by crab fisheries is also produced by the ton and Gärtner said crab shells could also form the basis of plastic.

"Crab shells contain chitin, an organic polymer that can be extracted. And crab shells are a problem," he added, "because they release toxic gases when they're rotting in landfills."

'From bread for bread'

Today, plastics from renewable sources are applied as diversely as classical plastics. They can even be integrated into textiles. Rainer Rihm at the Fraunhofer Institute for Applied Polymer Research in Potsdam has developed disposable razors, polo shirts and baseball caps - all out of a polylactic acid, a derivative of corn or sugar cane.

"You could make car parts or wall mounts out of it," the engineer told DW. "Medical applications are also possible - a screw that dissolves inside the human body." The original materials would remain behind in the body, he added, and would then be broken down.

"In [Potsdam] there's an institute with the motto, 'From bread for bread,'" Rihm said. "From old bread you extract lactic acid, make polylactic acid out of it, and then make bread bags out of that." 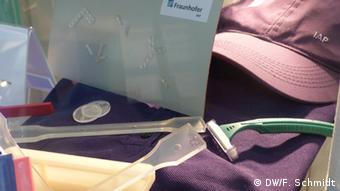 Coming soon to a retailer near you?

But there's a far simpler way to plastics a little greener, said Gabriele Peterek of the Fachagentur für Nachwachsende Rohstoffe, or "Agency for Renewable Raw Materials." Polypropylene, a classic, oil-based plastic, is a good example.

"To make that more natural, there's always the option of reinforcing it by utilizing cellulose fibers - fibers made from wood," she told DW.

Whether in vehicle interiors or gas tank caps made from up to 20 percent wood, the possibilities are numerous. The advantage is that, through cellulose, which is also used in paper and cardboards, the plastic gains solidity.

Today, high-speed tires for cars already contain a semi-synthetic fiber called rayon viscose, a product created largely from wood pulp. Such fibers last longer than natural fibers such as flax or hemp - and even trump glass or carbon fibers.

When it comes manufacturing high-strength, fiber-reinforced plastics, Peterek said, there's a lot more that can be done.

Buying local produce reduces the carbon footprint of our meals, so why aren't shoppers interested? One German farmer offers city-dwellers the chance to work the land, so they can appreciate the climate cost of food. (01.03.2013)

Harnessing electricity from our window panes or from paper might sound like something out of a sci-fi film. But solar technology has made huge strides in recent years and is close to realizing some of these ideas. (17.01.2012)