Researchers in Hanover are looking into how the fiber in spider webs can be used to help connect new nerve fibers and veins in humans. The spider fiber could also change how surgeons treat wounds. 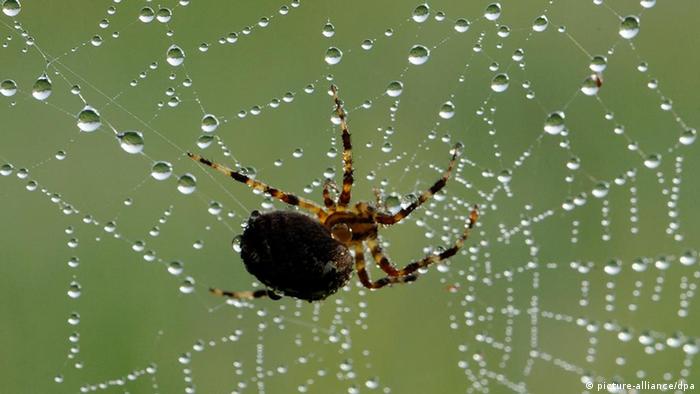 Arachnophobia, the fear of spiders, is one of the world’s most common types of phobias. But a group of scientists believe there's no reason to fear spiders in surgery.

Experiences from Indians in South America show that entire spider web can be used to treat heavily bleeding cuts. And the wound would normally be healed within days.

That led researchers at the Hanover Medical University are looking into how the fibers of Nephila, a South American spider species, could be used to treat wounds.

With a trained hand, Hanover Medical University researcher Christina Allmeling picks out a wiggling spider from one of the webs in a lab.

The lab contains up to 40 Nephila spiders, which are also known as the golden silk orb-weaver. The spiders can spin a web that spans up to one meter in diameter.

Allmeling attaches the spider to a gauze compress.

"The gauze is then pressed firmly with pins so that the spider can't move and only its abdomen sticks out from the pad," she explains. 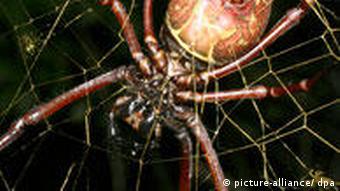 A Nephila spider, the species is being used in the tests

Allmeling quickly locates the tip of the thread and pulls out a piece from the abdomen of the eight-legged spider. Then she pastes the tip of the fine thread on a spinner - a 30-centimer electrically powered wheel, which is used to extract the spider silk. During the process, up to 200 meters of spider silk can be extracted.

"The spider produces silk in one of seven silk glands," says Allmeling, noting that a spider cannot produce a silk web itself.

The amount of silk a spider produces mostly depends on its size and the amount of food its getting. Both these factors affect the length of time required by researchers to extract the spider silk.

Surgeons could use the spider threads to repair torn tendons and nerves, he says.

Vogt believes that the threads could be good stitching material because of their "very high tear resistance, tensile strength and particularly smooth surface." 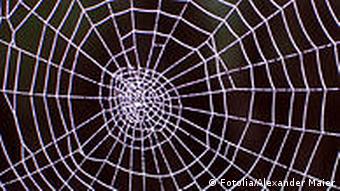 Spider webs can span up to one meter in diameter

Also, spider silk is made of natural materials rather than plastic.

"Plastics generally don't decompose, and if they do, they can cause certain inflammatory reactions," says Vogt.

Vogt and his team want to use spider silk as a high-tech material in various ways.

It could be used for treating nerve damage the many motorcyclists, who often end up losing feeling in the arms and shoulders following an accident.

Spider silk could be implanted in the shoulder to repair the nerve damage.

Normally, veins from a pig would be freed of their cells, so that they can be used as a "biological envelope."

"Hundreds of spider silk threads go into this envelop. The new growing nerve fibers find their way along the threads," Vogt says.

Another benefit, he adds, is that even bundles of nerve fibers also navigate along the threads.

"That means the nerve fibers find their way and grow together," Vogt notes.

The new method has worked well in animal tests with sheep and primates. The next step is to test it on humans to see whether or not they also can benefit from spider fiber.

A small sample of human skin has been bio-engineered to include spider's silk between its layers. The Netherlands Forensics Institute has test-fired low-speed rifle bullets at it, and shown that it halts them. (19.08.2011)

Why are spider silk fibers so incredibly strong? That's a question scientists have been trying to answer for years and now researchers have found new information about the architecture of that fascinating raw material. (02.03.2011)