A small sample of human skin has been bio-engineered to include spider's silk between its layers. The Netherlands Forensics Institute has test-fired low-speed rifle bullets at it, and shown that it halts them. 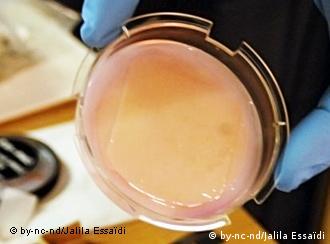 This summer, a very unusual science project is on display at a museum in Leiden, southwest of Amsterdam. There's a piece of human skin that's been genetically combined to grow in conjunction with spider silk. This unique combination makes the skin bulletproof against a .22 caliber rifle - the standard for a Type 1 bulletproof vest. This means it can stop a 2.6-gram (0.09-ounce) bullet traveling at 329 meters per second (1,080 feet per second).

The project, which is appropriately named "2.6g 329m/s," is the creation of Dutch artist Jalila Essaidi. She says she was inspired by Randy Lewis, an American professor of molecular biology at the University of Wyoming, who in 2010, managed to genetically engineer goats whose milk contains the proteins that create spider silk. Essaidi contacted Lewis, and added other partners in the Netherlands to create a special type of human skin that can resist relatively slow-moving bullets. Her piece is part of the "Designers & Artists 4 Genomics" exhibition currently on display at the Naturalis Museum in Leiden, and will be there until January 2012. 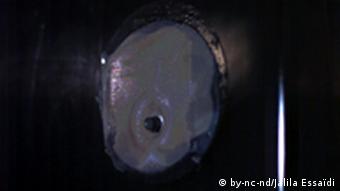 The skin is able to stop relatively slow bullets

Jalila Essaidi: Yes, it's something that instantly captures your imagination. You think of goats with eight legs and stuff. I just thought, what would this new invention mean for the public, for the audience? And why not directly apply it on humans? How far do we want to go to feel really safe in this world?

How did you get a hold of spider silk and why did you decide to try to test it on bullets?

Last year I won a designers and artists for genomics award, which included 25,000 euros ($35,800), so I could work on my plans. So I contacted Randy Lewis in America, and told him about my art plans to create human bulletproof skin, and he liked the idea, so he jumped on board. And he sent me a few lab samples of his silk, because it's not made in large quantities at the moment. Then I looked up more partners, like the Department of Dermatology in Leiden that creates human skin, the epidermis and the dermis, and the Netherlands Forensics Institute.

We all worked together. Randy sent the silk, Dermatology made the skin with the spider silk in between the dermis and the epidermis and at the Netherlands Forensics Institute we shot it and made some high-speed photographs of the impact of the bullets. 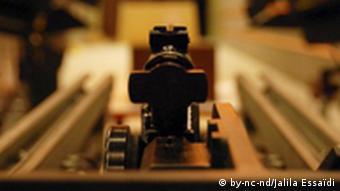 The Netherlands Forensics Institute tested it with real bullets

What is the main purpose of doing this?

The big idea is to show that it works, that it's not only a crazy idea, but to show that if you mix human skin cells with spider cells, it might actually work - and it did work with slow bullets. But it's to start a discussion about futuristic things, about how we can play with human genes and do we want to include ourselves in these things that are happening in science? How far do we want to go with feelings of safety, and do you feel better when you're wearing bulletproof skin?

It's about as big as your hand.

Are the skin and the silk woven together?

Yes, it's like a sandwich. In between the dermis and the epidermis, there's a spider silk mesh. The spider silk is biodegradable, so in time it will loosen up in the skin.

You're coming at this from the artistic side and using it as a way to think about the evolution of bio-engineering, is that right? 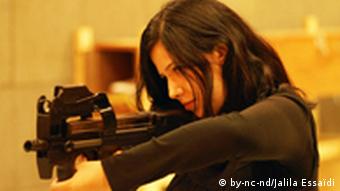 As an artist in this field do you feel more like an artist, or more like a scientist, or both?

Malaria could be genetically modified out of mosquitoes, scientists say

New research shows genetic modifications could dramatically lower mosquitoes' ability to transmit malaria. The lead researcher explains how the process could eliminate the disease - and possibly even all mosquitoes. (27.04.2011)

Researchers found that those who prioritize family, friends, altruistic goals, and exercise are happier than those just chasing money and success. (11.10.2010)