Three Saudi activists have been honored alongside anti-corruption campaigners at the awards ceremony. Known as the Alternative Nobel, the prize recognizes efforts thought to be ignored by the Nobel prizes. 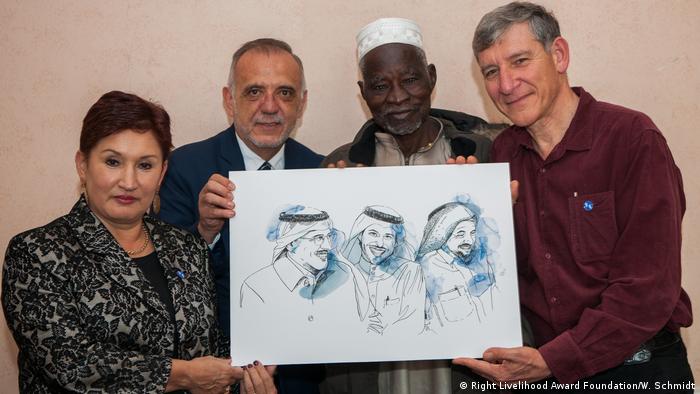 Three jailed activists in Saudi Arabia were among a series of people recognized for their work at the presentation of the so-called "Alternative Nobel Prize" on Friday.

The Saudis were honored in absentia at the Right Livelihood Award Foundation ceremony in Sweden for campaigning for reform in the repressive kingdom.

The co-founders of the banned Saudi Association for Civil and Political Rights, Abdullah al-Hamid and Mohammad Fahad al-Qahtani, are serving sentences of 10 and 11 years. The third Saudi, Waleed Abu al-Khair, was sentenced to 15 years in 2014. He is known for defending activists such as jailed blogger Raif Badawi.

The foundation urged the kingdom to stop "harassing and killing those who fight" for democracy. Foundation head Ole von Uexkull said last week the trio had "acted through peaceful means" in their activism.

Al-Qahtani's son, Omar, and London-based Saudi human rights activist Yahya Assiri accepted the award. "They inspire and encourage many others to follow in their footsteps," said Assiri, urging the Saudi authorities to release the trio.

The annual awards were created in 1980 to honor efforts that the philanthropist prize founder Jakob von Uexkull felt were being ignored by the Nobel prizes.

Former President Otto Perez Molina was ousted and arrested in 2015 after the pair exposed a criminal network in the Guatemalan state apparatus involved in customs and tax fraud.

"Guatemala was organized to enrich powerful actors, and that is what we have begun to defeat," Aldana said in her acceptance speech.

The foundation said their efforts resulted in more than 310 convictions and 34 proposed legal reforms.

Others awarded on Friday were Yacouba Sawadogo, a farmer from Burkina Faso, and Australian agronomist Tony Rinaudo for fighting desertification in the Sahel region of Africa.

"Humans are the first ones responsible for the deterioration of environment, the ones wronging nature," said Sawadogo, who pioneered the use of traditional methods to restore degraded land and improve food security in Burkina Faso and Niger.

As honorary winners, the Guatemala-based duo will not receive a cash prize; however, the other winners will share a cash prize worth 3 million kronor (€290,000, $340,000).