Want to throw back a nice Bavarian brew while watching a World Cup match in Germany in 2006? Sorry, you'll have to make due with American suds. U.S. brewer Anheuser-Busch has the exclusive contract for beer there. 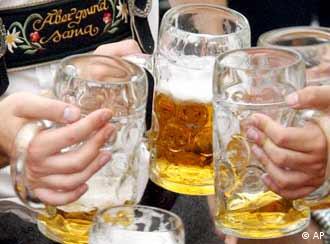 World Cup 2006 might be taking place in Germany, but the beer flowing from the taps at the concession stands is going to be American, thanks to a sponsoring agreement between FIFA, soccer's governing body and Anheuser-Busch, the world's largest brewery.

In the stadiums across Germany where World Cup matches are being played, local firms are only allowed to do business if they, according to the contract stipulations, are "not competition for the sponsor." Therefore, locals brews are taboo; they can only sell their pilsners and ales outside a specific area around the stadium premises.

"That can't be," complained Hermann Winkler, president of the state of Saxony Sports Federation, to the Sächsische Zeitung newspaper. "A lot of breweries support sports in Saxony, but the minute there's a little money to be earned, they're left standing out in the cold."

However, Anheuser-Busch, maker of Budweiser and Michelob beers, appears to have scored a winning goal with this business deal. The U.S. multinational has tried for years to get a foothold in Germany, particularly with its Budweiser brand. But since that name is already taken in Europe by the original Czech Budweiser brand, the Americans have repeatedly hit a brick wall. That wall looks set to crumble in two years' time.

Reinhard Zwanzig, who heads Saxony's Brewers' Federation, said the decision was regrettable, but he doesn't think the American Budweiser is going to find many of its own fans among the soccer ones. Besides, he said aficionados should be concentrating on the game in the stadium, not the sudsy stuff.

"Afterwards, they'll all go into town and toast the victors with the regional beer," he said.

Beer galore, Germans in Lederhosen and the umpah-beat of traditional Bavarian music - the annual Oktoberfest, attracting visitors to Munich from all over the world each year, kicks off this weekend. (Sept. 19, 2003)