Italy’s prime minister-designate, Paolo Gentiloni, is viewed by many as only an interim candidate, but also as one who could calm the political waters before the next election. 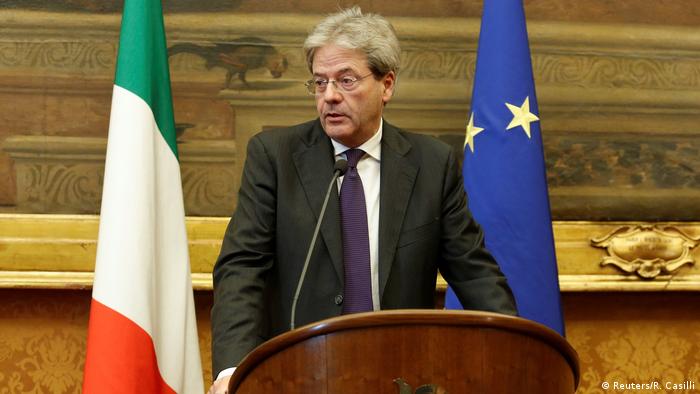 The premier-designate has retained several officials from the outgoing government, including the ex-interior minister. His government will focus on harmonizing Italy's electoral laws and fortifying its banking sector. (12.12.2016)

When Matteo Renzi took office, he promised to wreck the old structures that have been slowing Italy down for decades. But on Sunday he was hit by the wrecking ball himself, writes Andreas Rostek-Buetti. (05.12.2016)

The Italian Prime Minister has resigned but has been asked to serve as a caretaker until a new government is in place. The resignation follows Renzi's resounding defeat in a referendum on constitutional reforms. (07.12.2016)

Brussels has queried Italy's national budget as the country struggles with an influx of refugees. Prime Minister Matteo Renzi has threatened to block the EU budget, citing a lack of solidarity. Karl Hoffmann reports. (29.10.2016)

Media reports have said the European Central Bank has refused to allow Italy's Monte dei Paschi di Siena more time to raise cash the bank needs to avoid being wound down. The lender's shares tanked on the news. (09.12.2016)

Markets have not shown any signs of panic after Italian Prime Minister Matteo Renzi said he would resign following a solid defeat on constitutional reform. Even the euro tanked only temporarily. (05.12.2016)

The media likes to call him "proletarian count," and "gentleman." 62-year-old Paolo Gentiloni is from an ancient Italian noble family, the Gentiloni Silveri. However, his aristocratic background didn't stop him being left-wing. As a young man, he was even active in left-wing extremist movements. But over the course of his political career, his radicalism has worn away. Gentiloni has held two ministerial posts – as Communications Minister in 2006-08 and, until a few days ago, as foreign minister – and considers himself a Social Democrat.

Perhaps it's his genteel background, or maybe it's just his personality: either way, until now Gentiloni has always taken a back seat. In terms of character, he and his patron, Matteo Renzi, who has just resigned as prime minister, could hardly be more different. Paolo Gentiloni is the quiet, loyal worker in the background; he will succeed Renzi, an extrovert who tends to overestimate himself. Gentiloni did try once to push himself to the fore, when he put himself forward to become the mayor of Rome, but his party chose a different candidate. It was shortly after this that Renzi appointed him foreign minister, after the incumbent, Federica Mogherini, stepped down to become the EU's foreign policy commissioner.

The new man who's about to move into the Palazzo Chigi is already the butt of jokes. Gentiloni is being mocked as Renzi's "clone," his "avatar." The Lega Nord anticipates a "photocopy" of the government so far, and the Five Star Movement has conflated the two politicians' names to "Renziloni," to indicate that there's practically no difference between them.

Gentiloni's comments during his time as foreign minister demonstrate that he is not always gentle. In February 2015 he said in a television interview that "if necessary, Italy is prepared to fight against Islamic State in Libya because the Italian government cannot accept a terrorist danger in power just a few hours away from Italy by boat." He was also firm in an interview with the German daily Die Welt about the austerity policy demanded by Germany: "I know that many in Germany think we have a merry financial policy over here. But if we think we're going to pay off debt accumulated over 30 years by strangling Italy, we'll strangle the whole European economy."

Gentiloni's quiet, conciliatory manner is both an advantage and a disadvantage for the quarreling Democratic Party in the aftermath of the failed referendum. He maintains good relations with the various political camps, and should be the right man to unite the party. The disadvantage is that he is seen simply as an interim candidate. That's presumably also how Renzi sees Gentiloni's role: The count can go on ruling the country and keeping Renzi's seat warm until the election in a few months time. 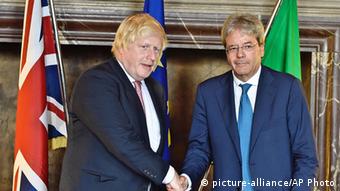 What's certain at the moment is that the financial world breathed a sigh of relief when Gentiloni was put in charge of forming a government. One of the most important challenges for it will be the unresolved banking crisis. This is presumably also why the finance minister, Pier Carlo Padoan, wasn't made prime minister: His current ministry needed him too badly.

It's still unclear when the election will take place. Renzi himself said in an interview with the Quotidiana Nazionale newspaper that he expected it to be in June. The eurosceptic Five Star Movement and the right-wing populist Lega Nord are already clamoring for it to take place immediately, muttering about a betrayal of referendum voters, if the election is delayed too long. Opinion polls currently show the Five Stars in second place, just behind the Democratic Party.

Other countries are also keeping a close eye on Italian politics. The Spanish newspaper El Mundo writes: "Against the backdrop of the wave of populism in Europe, Gentiloni must now proceed with the circumspection that his supporters ascribe to him."

If things go as the majority of EU governments expect them to, Paolo Gentiloni will have done his country and Europe a service should he manage to stabilize Italy between now and the election. In the current climate, that in itself would count for a great deal.