The Italian Prime Minister has resigned but has been asked to serve as a caretaker until a new government is in place. The resignation follows Renzi's resounding defeat in a referendum on constitutional reforms. 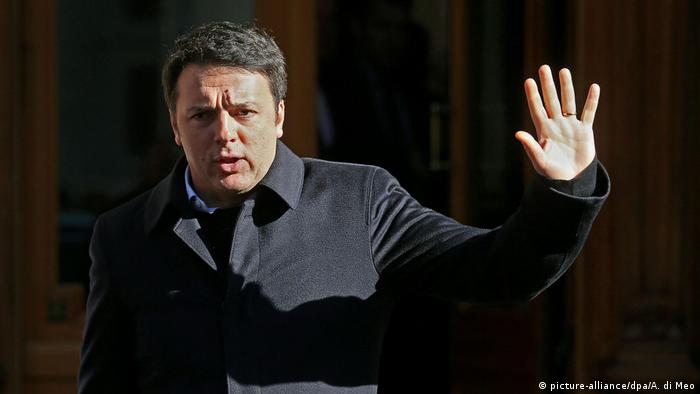 When Matteo Renzi took office, he promised to wreck the old structures that have been slowing Italy down for decades. But on Sunday he was hit by the wrecking ball himself, writes Andreas Rostek-Buetti. (05.12.2016)

The "No" campaign in Italy won with feelings, not with sense, says Bernd Riegert in Rome. The consequences for Italy could be dire. (05.12.2016)

President Sergio Mattarella urged Prime Minister Matteo Renzi to put his planned resignation on hold, at least until parliament has approved next year's budget. That could be done as early as Friday. (05.12.2016)

Following a referendum defeat, Italian PM Matteo Renzi has said he will step down without delay. European leaders, including Angela Merkel, have reacted with disappointment after voters rejected his proposed reforms. (04.12.2016)

Markets have not shown any signs of panic after Italian Prime Minister Matteo Renzi said he would resign following a solid defeat on constitutional reform. Even the euro tanked only temporarily. (05.12.2016)

Mattarella asked Renzi to stay on in a caretaker capacity until a new government can be put in place, a statement from the president's office said.

Presidential aide Ugo Zampetti told reporters that Mattarella would start consultations on Thursday with various party leaders to see where support lies for a new government. The talks are expected to end on Saturday afternoon.

The center-left leader initially said he would step down immediately following last weekend's referendum in which Italians rejected his proposed constitutional changes. After nearly 60 percent of voters cast "no" ballots, he told the nation that his government was finished.

At the request of Mattarella, Renzi stayed on until parliament approved Italy's 2017 budget - which passed earlier on Wednesday. His resignation kicks off a period of political uncertainty in the eurozone's third largest economy.

Next steps for Italy

Renzi currently still heads the Democratic Party (PD), but the party is plagued by internal divisions that were laid bare during the referendum campaign.

Analysts believe that Renzi could either be toppled by one of his former PD allies or he could survive as leader and stage a comeback during the next elections.

Italy must hold an election by February 2018, but opposition parties are calling for elections to be held up to a year early, saying the referendum result signified a vote of no confidence in the center-left coalition.

Renzi reportedly supports a February 2017 election, calculating that the PD will emerge with the largest share of the vote despite the rise of support for the populist Five Star Movement.

The outgoing prime minister misjudged support for his constitutional reforms which included reducing the size and powers of the Senate. Another reform would have centralized power in Italy, transferring powers from its regions to the central government.

The government said the changes were needed to reduce political gridlock which is widely blamed for Italy's economic troubles. Critics, however, argued that Renzi's reforms risked eroding Italy's democracy.