The prime minister-designate has given up on his mandate to form a government after talks with the president collapsed. The president is to meet with Carlo Cottarelli, a former senior IMF official, on Monday. 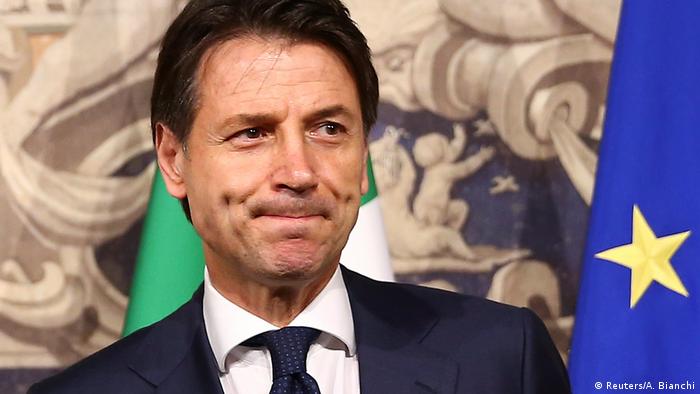 Italy's prime ministerial candidate, Giuseppe Conte, said Sunday he would not be leading the next Italian government.

"Giuseppe Conte has given up the mandate to form a government, given to him on May 23," an official from the presidential palace said.

Talking to reporters after he informed President Sergio Mattarella of his decision, Conte said he "gave the maximum effort, attention, to carry out this task with the full collaboration" of would-be coalition partners — the anti-establishment 5-Star Movement and far-right League.

Conte: 'I have returned the mandate that Mattarella gave me'

Earlier in the day, Conte met Mattarella with his list of ministers in a bid to end the country's political stalemate. But the two could not agree on Savona's role in what would have been Western Europe's first populist government. Mattarella is staunchly pro-Europe.

Even before the two had finished with their meeting, League's Salvini said the only option now was to hold another election, probably later this year.

"In a democracy, if we are still in democracy, there's only one thing to do, let the Italians have their say," Salvini told his supporters in central Italy.

Di Maio said the president's rejection of the coalition's choice for economy minister was "unacceptable."

"It's an institutional clash without precedent," Di Maio said on a livestreamed Facebook video. "What's the point of going to vote if it's the ratings agencies that decide?"

The 5-Star leader also suggested that Mattarella could be impeached. "I hope that we can give the floor to Italians as soon as possible, but first we need to clear things up. First the impeachment of Mattarella... then to the polls," Di Maio said on Italian television.

Mattarella said he refused to approve Savona's appointment as that would have "alarmed markets and investors, Italians and foreigners."

"Every day, the [bond] spread goes up, it raises our debt costs," he said.

Savona has likened Italy to being in a "cage" of austerity restrictions favored by fellow eurozone member Germany.

Mattarella's office said the president has invited Carlo Cottarelli, a former senior director at the International Monetary Fund (IMF), for talks on Monday.

The announcement suggested Mattarella may ask him to head a technocrat government.

Who is Italy's candidate for prime minister, Giuseppe Conte?

Italy's populist coalition has tapped an academic with no political experience to be the country's next prime minister. If confirmed, he could lead a big-spending, anti-establishment government. So who is Giuseppe Conte? (21.05.2018)

The anti-establishment 5-Star Movement and far-right League are on the verge of forming the new Italian government having promised a "revolution." DW looks at Italy’s potential first populist coalition. (21.05.2018)

Italy's populist government did not just fall from the sky — it was elected. And the incoming leaders could prove to be an explosive force for the European Union. DW's Bernd Riegert asks: What's next? (22.05.2018)