A British bomb carrying 40 kilograms (88 pounds) of dynamite was discovered in the coastal city of Brindisi. Authorities had to evacuate more than half of the city before attempting to defuse the 1941 ordnance. 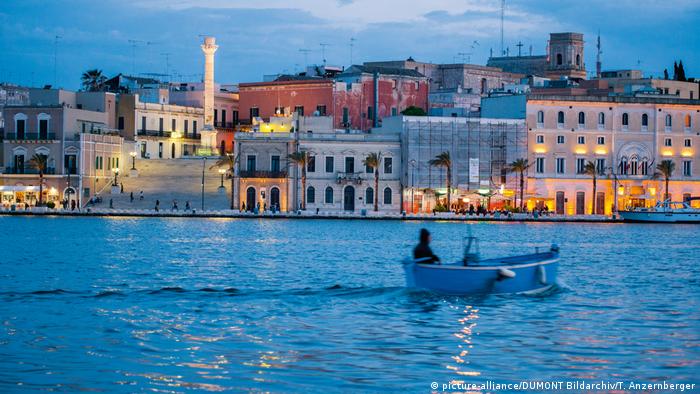 Explosives experts on Sunday defused a World War II bomb in the southern coastal Italian city of Brindisi (above) following a historic evacuation of the city center.

More than 50,000 people had to leave their homes in the run-up to the operation, comprising more than 60% of the city's population. Local media described the evacuation as the largest operation of its kind since the end of the war.

Technicians guided a remote-controlled robot to defuse the explosive. Similar models of the robot had been deployed in Iraq and Afghanistan, according to Italian newspaper Corriere della Sera.

Read more: Balsamico 'made in Germany' not illegal, says EU

The explosive was identified as a British bomb presumably dropped on Brindisi in 1941. It weighed more than 200 kilograms (440 pounds) and carried 40 kilograms of dynamite.

The bomb was discovered during a refurbishment project for a cinema. However, workers had damaged part of the bomb, raising the likelihood that the explosive could detonate during Sunday's operation.

After removing the bomb, authorities said they would detonate it in a controlled environment next week.

Lovers of fascist architecture never disappeared from Italy's capital, where Mussolini sought to centralize powers. He continues to be revered in one of the Roman neighborhoods the dictator built, and elsewhere. (17.08.2019)

Tens of thousands of people gathered in Rome for a rally organized by the "Sardines." The movement denounces Italy's far-right leader Matteo Salvini and his anti-immigration policies. (14.12.2019)