Italian authorities have called for quick action in the face of a deteriorating situation in Libya. There is a risk of Islamic State establishing a stronghold in the African country, the Italian foreign minister said. 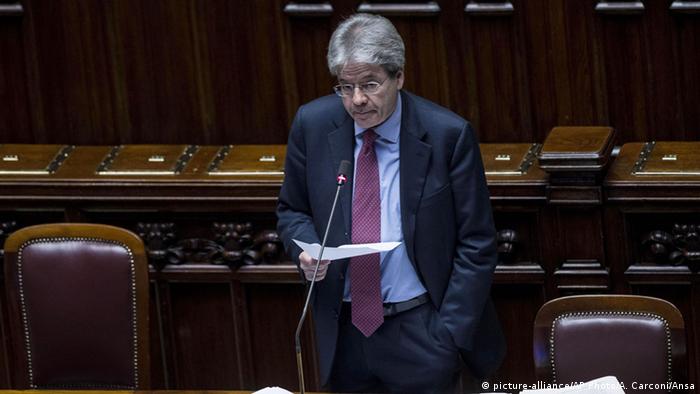 Italian Foreign Minister Paolo Gentiloni urged the international community to "quicken its pace before it is too late" to find a solution for security problems in Libya. Speaking before the Italian parliament on Wednesday, Gentiloni warned of "Islamic State" fighters merging with many armed factions wrestling for control of the North African country.

"There is an evident risk of an alliance being forged between local groups and Daesh and it is a situation that has to be monitored with maximum attention," Gentiloni told Italian lawmakers, using the Arabic acronym for Islamic State.

Speaking hours before an emergency UN Security Council meeting on Libya, Gentiloni said the United Nations must "double its efforts" to promote political dialogue in the country.

On Tuesday, Italy joined the United States, France, Germany, Spain and Britain in calling for a national unity government in Libya. The country currently has two rival governments, and Libyans are divided among competing militias, Islamist factions and along tribal lines.

"We have to be clear, the situation has deteriorated. The time at our disposal is not infinite and is in danger of running out soon," the Italian foreign minister said.

Egyptian President Abdel-Fattah el-Sissi called for a UN-mandated military intervention against IS in Libya, after recent video showed 21 Egyptian Coptic Christians being beheaded by the Islamist forces.

Last week, Italy seemed inclined to support a military intervention in its one-time colony, but Prime Minister Mateo Renzi has since stressed the role of diplomacy.

Gentiloni has also stressed that Italy believed the solution to Libya's problems was political, not military.

"Saying we are in the front line does not mean announcing adventures or crusades," he said, adding that Italy is ready to monitor any ceasefire, contribute to peacekeeping efforts, repair infrastructure and provide military training so militias can be folded into the regular army.

Pope calls for prayers on Libya

Rome and Tripoli cooperated closely during the decades-long rule of Moammar Gadhafi, who was ousted in 2011.

With Italian Mediterranean islands located relatively close to the Libyan shore, Italy had to deal with a large wave of refugees attempting to reach European soil.

Italian authorities have also raised fears that terrorists with IS ties might mingle among the refugees and reach Italy by sea.

On Wednesday, Pope Francis also joined the appeals to alleviate the Libyan crisis. The pontiff asked for prayers that "the international community can find peaceful solutions to the difficult situation in Libya."