Special courts in Italy that only hear asylum-seeker appeals are set to issue quick, binding decisions. It takes about two years to navigate the asylum appeals process. 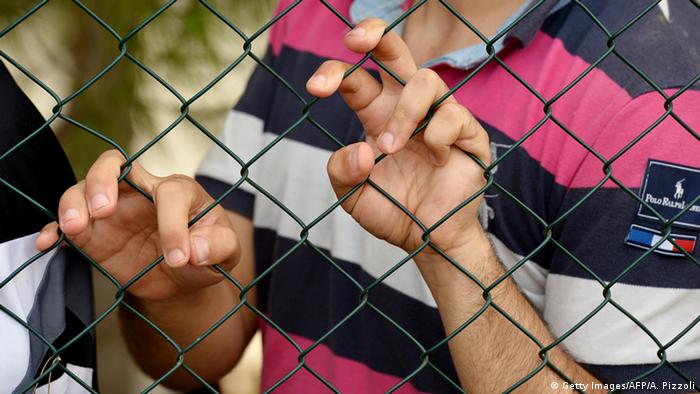 Some 1,600 migrants rescued in two days

With at least 100 feared dead after two shipwrecks in the Strait of Sicily, the number of people who have died in the Mediterranean Sea this year has reached 5,000. This is the highest ever annual death toll. (23.12.2016)

The head of Germany's federal police says the country should issue temporary ID documents to speed deportations of potentially dangerous foreigners. Would that be legal and, if so, would it work? (23.01.2017)

The Italian government approved on Friday the creation of several special appeals courts to issue fast, binding decisions on the asylum-seekers' applications.

The new courts' decisions would be binding, abolishing the right to further appeals, Italy's Justice Minister Andrea Orlando announced after a cabinet meeting.

The measures were introduced to speed up the processing of asylum claims as well as the deportation of people whose claims are rejected. Italy is often first landing point in Europe for thousands of people trying to make their way from Africa to the EU. A record number of people died in the Mediterranean Sea while trying to reach Europe in 2016. The Italian government recentlyreached a deal with Libya on reducing the number of people leaving from the North African country's coast by boat.

It currently takes an average of two years to complete the legal asylum process in Italy, often involving multiple levels of appeals.

In addition to the new appeals courts, the measures agreed upon by cabinet ministers add 250 specialists to asylum commissions, which carry out the first assessment of asylum requests.

Orlando denied that doing away with a second appeal would lower standards of legal protection for asylum-seekers.

"These will be specialized judges with detailed knowledge of migration issues," he said. "We are talking about life-defining decisions; we don't want to leave people in limbo."

The United Nations refugee agency welcomed the strengthening of the asylum commissions but expressed concerns about the new appeals courts.

"There will have to be a very thorough examination of individual cases. If it is impossible to appeal, the first hearing has to be as good as possible with the emphasis on quality rather than speed," a UN spokeswoman said.

In the current system, appeals overturn the original denial in an estimated 70 percent of cases. With no other way to legally stay in Italy, many people request asylum even if they are ineligible, in many cases eluding authorities after a denial.

The new measures also included building 18 Permanent Repatriation Centers across the country to replace the Identification and Expulsion Centers, which have been plagued with reports of overcrowding and sometimes violent protests.

The new centers would house a maximum of 100 people, and the prisons ombudsman would have unlimited access to the facilities.

"Our strategic objective is not to close our doors but to transform migration [from a criminally controlled racket into a safe, orderly flow] that does not put lives at risk," Prime Minister Paolo Gentiloni told reporters at a press conference.

A record 181,000 boat migrants arrived in Italy last year, and the initial asylum assessment committees rejected more than 60 percent of the 124,000 requests received.

The measures were the latest sign of Italy's tougher approach to deterring further migrant arrivals. They came into force immediately but need parliamentary approval within two months.