Italy to move 'Alan Kurdi' migrants to another ship

Italy will transfer migrants from crowded rescue ship "Alan Kurdi" to another vessel where they would be kept in quarantine over coronavirus concerns, officials said. The privately owned ship has been stranded for days. 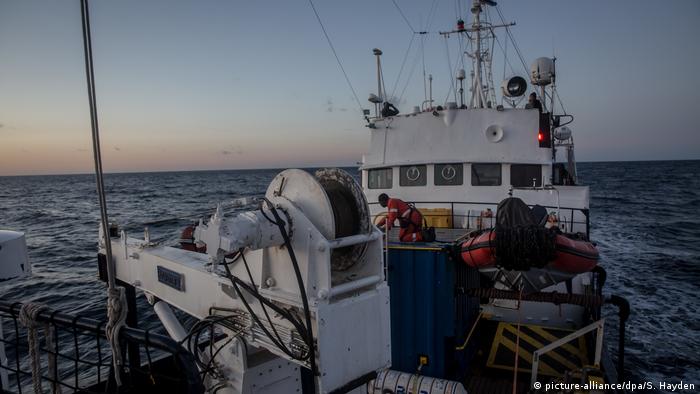 The migrants aboard the privately-owned German ship "Alan Kurdi" will be removed from the rescue boat, Italy's transport ministry announced on Sunday, following days of indecision which put Rome under international pressure.

Instead of letting the refugees disembark on Italian soil, however, the authorities will transfer them to another ship, where they would be screened by Italian health officials and the Red Cross employees. The migrants would then be kept in quarantine on the other vessel.

The operation should commence "in the coming hours," with the Italian Coast Guard providing support off Sicily's coast, the ministry said. They did not specify for how long the quarantine would last.

"Alan Kurdi" picked up 150 migrants this Monday from wooden boats off the Libyan coast, with one of the rescuees taken off board and taken to Lampedusa over a medical emergency. However, authorities in Malta and Italy refused port to the overcrowded vessel, citing coronavirus concerns.

The rescue ship is operated by a German non-governmental humanitarian organization Sea-Eye and sails under a German flag. For this reason, Italy insists that the ship should go to a German port.

On Friday, Germany's Interior Ministry said the government was examining alternative locations where the ship could dock. With the situation on board growing dire in recent days, however, Berlin also asked for the EU to provide assistance and Italy supplied the vessel with food on Saturday.

In the Sunday statement, Italy said the transfer of migrants became "necessary after the  'Alan Kurdi' refused to follow the procedure to return to the country under whose flag it is sailing, Germany." The transport ministry also said the migrants would not be sent to Italian ports because of "pressure" on emergency services due to the ongoing COVID-19 pandemic.

'We would be very thankful'

"If the Italian coastguard took the rescued people from 'Alan Kurdi" this stalemate would finally end," he said. "We would be very thankful for this solution."

Italy has repeatedly criticized the German NGO for continuing to run rescue operations in the Mediterranean and bringing illegal migrants to Italy's shores.