The Eleonore has docked and disembarked its over 100 rescued refugees, in violation of a ban. The government has now seized the ship and vowed to make the German charity workers pay dearly. 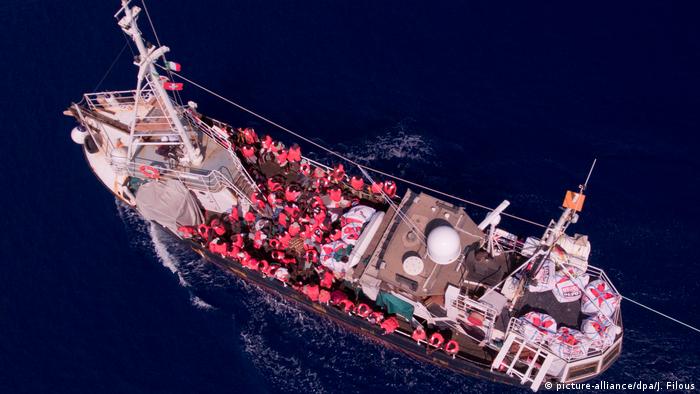 German rescue ship Eleonore docked in Sicily on Monday in defiance of a ban from the Italian government, which has now seized the ship. Outgoing Interior Minister Matteo Salvini said that the Mission-Lifeline charity that operates the vessel would pay dearly for the violation.

"Now we are in a safe port," captain Claus-Peter Reisch wrote on Twitter, followed shortly thereafter by "now our ship is confiscated."

Eleonore had been at sea for eight days, amid deteriorating humanitarian conditions for the over 100 people it had saved from drowning in the Mediterranean.

Another rescue ship, the Mare Jonio, announced that it would also dock in spite of the ban due to "health reasons." It currently has 31 rescued migrants on board.

German Foreign Ministry spokeswoman Maria Adebahr said that German authorities were in touch with Italian authorities regarding the situation.

"A good and quick solution needs to be found for this case too," she told reporters in Berlin, referring to deals being struck in the past to distribute migrants rescued at sea to willing EU member state.

Since Italy's government took power in June 2018, it has implemented a series of increasingly draconian measures, including closing refugee camps and refusing to allow rescue vessels access to Italian ports.

Although Salvini and his far-right League party will soon be out of the government following the interior minister's failed attempt to trigger snap elections, there is no end in sight for the policies he has put in place in the past year.

This is because the League's former coalition partners, the populist Five Star Movement (M5S), which also espouses anti-immigrant views, are likely to remain in government as they work on a new alliance with the Democratic Party (PD), which has not indicated any willingness to roll back Salvini's policies either.