The Five Star Movement is about to get its second chance to govern, this time in a coalition with the Democratic Party. The loosely defined populists have struggled to carve out a profile for themselves. 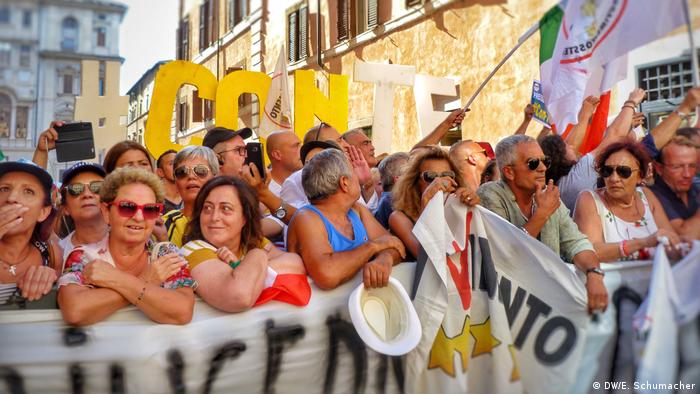 Started by comedian-turned-activist Beppe Grillo in 2009, Italy's Five Star Movement (Movimento Cinque Stelle, or M5S) has often struggled to define itself in traditional political terms. Its roots are in anti-establishment populism, grounded in the frustration that many Italians feel with the political system after having seen 65 different governments since World War II.

Since its inception, M5S has espoused stances on both sides of the political spectrum: a right-wing anti-immigration, anti-globalization and euroskeptic attitude more in line with former coalition partners in the League party, but also leftist policies on environmentalism, universal basic income and pacifism. Untroubled by not fitting into to a long-standing framework, the leaders of M5S have insisted that it is still a movement and not a political party.

Members of the movement also insist that some of its more right-leaning policies, such as euroskepticism, are not because of ardent xenophobia, but because of the way they perceive being in the eurozone as, for example, a boon to manufacturing giants in northern Europe at the expense of southern Europe.

Many of its leading lawmakers are also newcomers to politics. Rome Mayor Virginia Raggi, who scored M5S's first major municipal victory in 2016, had no government experience before running for city council three years earlier. Deputy Prime Minister Luigi Di Maio was briefly a webmaster, a journalism intern and a drink seller at San Paolo stadium in Naples, where he was still working when he joined M5S's predecessor organization, Friends of Beppe Grillo, in 2007.

Di Maio was first elected to the lower house of Italy's Parliament, the Chamber of Deputies, in 2013, which would prove to be a banner year for M5S: It incredibly garnered over 25% of the vote for the Chamber and 23.8% for the Senate in the first year it ever contested a national election. Though M5S has taken a clear stance against exorbitant pensions for former lawmakers, insisted that "politics is not a career" and opposed parliamentary immunity, Di Maio has invoked the latter twice when women have tried to sue him for defamation.

Di Maio became leader of M5S in 2017, when Grillo announced that he was taking a back seat to allow the next generation to steer the future of the party.

In the 2018 election, M5S continued its upward climb, getting the largest number of votes and the second most seats in Parliament, after Matteo Salvini's League. M5S unsuccessfully tried to woo the center-left Democratic Party (PD) to form a coalition, and, after three months of protracted negotiations, finally formed a populist coalition with the League, thus entering the national government for the first time.

The League agreed to name the law professor and complete political novice Giuseppe Conte, who was technically partyless but sympathetic to the M5S, as prime minister. Conte made Salvini and Di Maio his co-deputies.

Salvini used Conte's lack of international recognition and experience to his advantage, positioning himself as Italy's de facto leader and appearing more often in headlines and on the world stage than the prime minister and Di Maio. Di Maio and Salvini openly disputed several major political issues, such as the crisis in Venezuela and a proposed high-speed rail link with France.

The League surged in the May 2019 elections for the European Parliament, but M5S suffered the consequences of its ill-defined political profile and a year of being steamrolled by Salvini, tumbling to just 17% support. Emboldened by a leap from only 6.2% of the vote during EU elections in 2014 to 34.3% this year, Salvini continued his would-be strongman posturing. However, his attempts in recent weeks to topple the government — declaring that the alliance with M5S was dead and trying to trigger a no-confidence vote on Conte and hold fresh elections that he thought would prove to the League's advantage — have backfired entirely.

M5S has since branded Salvini a "traitor"and refused to work with him, but not necessarily the entire League, ever again.

On Thursday, Conte was given a mandate from President Sergio Mattarella to form a new government, this time a coalition between the PD and the M5S, giving the anti-establishment populists a second chance to govern.