The anti-establishment, populist M5S party has closed ranks ahead of a possible confidence vote in parliament. It stopped short of completely cutting ties with Interior Minister Salvini's far-right League party, however. 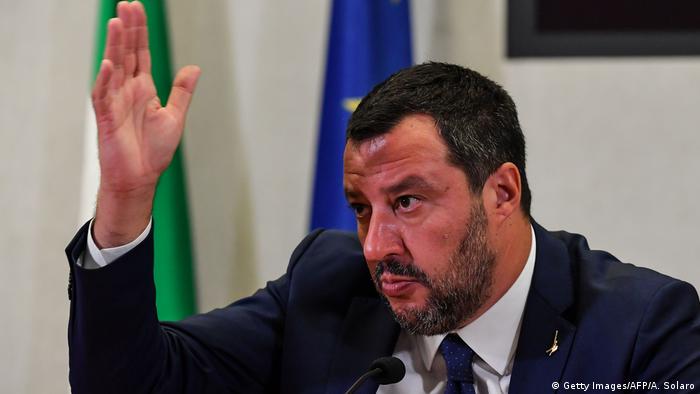 Italy's populist 5-Star Movement (M5S) held a summit on Sunday to attempt to set a course for the future as their coalition with the far-right League party appeared dead in the water. Although the party was divided on a number of issues, one thing was clear after the meeting: The M5S does not want to work with League party leader Matteo Salvini (above) ever again.

As one M5S member told Italian daily Corriere della Sera, it was mostly Salvini, and not the League that had the government on the brink of collapse. "After the mistakes he made, we can no longer speak with Salvini. Too bad, because there are other possible partners within the League."

M5S leader Deputy Prime Minister Luigi di Maio said of his co-deputy "no one has lost esteem for Salvini more than me. I trusted him."

The ruling coalition has been on shaky ground for months, with the League and M5S openly in dispute about everything from the political crisis in Venezuela, to infrastructure projects, to financial reforms.

Their partnership was always an unlikely one. M5S, begun by entertainer-turned-politician Beppe Grillo, is an anti-establishment populist movement that has sometimes struggled to define exactly what it stands for. Although it espouses a number of left-wing principles like raising the minimum wage and increasing taxes on the wealthy, di Maio has been just as anti-immigrant as the League at times.

Adding strain to the already tenuous alliance has been Salvini's tendency to position himself as the country's leader on the world stage, despite the fact that he serves as its interior minister and not its prime minister. The League's strong showing in May's EU elections, especially in relation to M5S's downward slide in voter support, has also served to embolden Salvini's would-be strongman attitude, increasingly cutting Prime Minister Giuseppe Conte and M5S out of public debate.

Salvini felt strongly enough about his party's position to call for a confidence vote against Conte last week. However, after the Italian Senate refused to approve the interior minister's call for an immediate vote, Salvini took a more concilatory tone, saying he could continue to govern with M5S after weeks of saying they couldn't work together anymore.

Grillo called Salvini "the traitor minister" at Sunday's meeting, giving a speech as he moves himself back into the limelight after having ceded leadership of M5S to the younger generation over a year ago.

Prime Minister Conte is set to address parliament on Tuesday before he faces the possible confidence vote.

Amidst the turmoil between the ruling parties, two former prime ministers are hoping that a government collapse could work to their favor: Matteo Renzi of the Democratic Party (PD) and Italy's perennial populist and former premier, Silvio Berlusconi of Forza Italia.

After more than two weeks, Italian Interior Minister Matteo Salvini has allowed 27 minors to disembark a migrant rescue vessel. Others on board have not been authorized to leave the boat. (17.08.2019)