Italian Interior Minister Matteo Salvini failed to force a no-confidence vote in parliament this week. Salvini is aiming for fresh elections, to capitalize on his right-wing League party's soaring popularity. 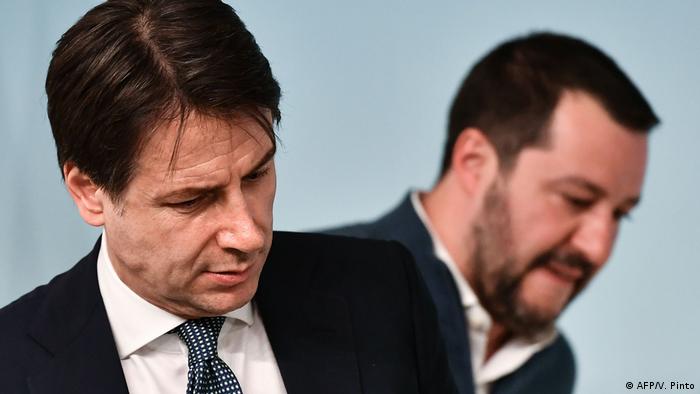 The Italian Senate has postponed a debate on the  ongoing government crisis.

"What is more beautiful, more democratic, more dignified than to give the choice back to the people," he told the Senate in a speech that was constantly interrupted by shouting from other parties.

The right-wing League party, the junior coalition partner of the anti-establishment 5-Star Movement, presented a no-confidence motion in the government last week. But the Senate rejected the bid to discuss it this week, voting instead to have Prime Minister Giuseppe Conte face the upper chamber on August 22.

It was not clear whether a no-confidence vote would follow then. Conte would have to offer his resignation to President Sergio Mattarella if a no-confidence motion passed — and fresh elections would then have to be held within 45 to 70 days.

In a surprise move, Salvini on Tuesday announced that if there were to be elections swiftly, he would in return support a demand by 5-Star to reduce the number of lawmakers from 945 to 600 in the new parliament. Such a reduction has been a key policy for the 5-Star Movement, which made cutting back highly paid lawmakers and their entourages a core promise to its base.

Salvini, who leads the right-wing League party, pulled the plug on Italy's ruling coalition last week, seeking to capitalize on his surging popularity by triggering fresh elections that could see him become prime minister.

But his coalition partner, the 5-Star Movement, is considering teaming up with the opposition center-left Democrats of former Prime Minister Matteo Renzi to form a new government and avoid an election four years ahead of schedule.

Many Democrat lawmakers are against teaming up with 5-Star, which had opted to form a populist government with the right-wing populist League after elections just one year ago.

But Renzi is pointing to the dire situation of the Italian economy: He wants to see budget cuts before year's end to avoid a recession.

The leader of Italy's far-right League, Matteo Salvini, has been met with defiance over his plans to hold a no-confidence vote. Salvini could become Italy's leader if the snap elections he wants are held in October. (12.08.2019)