Both of Italy's populist deputy prime ministers have rejected claims that their coalition is on the brink of collapse. Luigi di Maio nevertheless called for immediate talks to address the coalition's obvious differences. 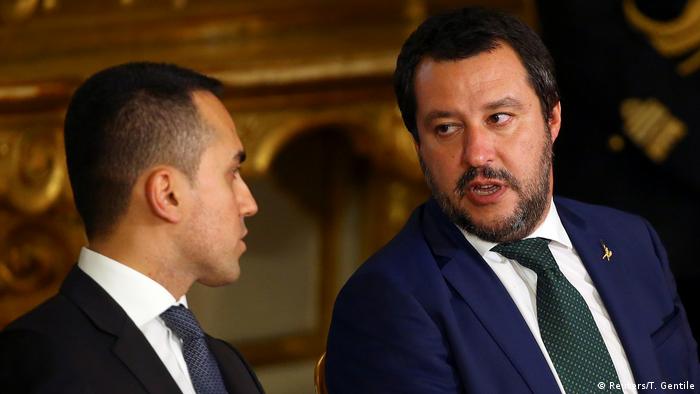 Italy's Deputy Prime Minister Luigi di Maio (pictured left) denied on Friday that the government was at risk of collapsing after months of strain within the ruling coalition.

"I reject that there is a crisis; this is just the dynamic of a government with two different parties," Di Maio told public broadcaster Rai. He added, however, that "there is need for clarification."

A day earlier, Di Maio's co-deputy, Matteo Salvini, fueled rumors about a collapse when he asked to meet with President Sergio Mattarella, who holds sway over accepting resignations and appointing the prime minister.

The coalition between Di Maio's left-leaning populist Five Star Movement (M5S) and Salvini's far-right nationalist League party has been somewhat shaky since they came into office in June 2018.

Since then, Di Maio, who is also economy minister, and Salvini, who is also interior minister, have been much more present on the wider political stage than Prime Minister Giuseppe Conte, a political novice who was brought in as a compromise between their two parties.

After EU elections in May saw the League gain support and M5S' share of the vote tumble, Salvini positioned himself more openly as the country's de facto leader.

The League and M5S have differed on several major policy issues such as the political crisis in Venezuela, taxation, immigration and a planned high-speed rail link between Turin and the French city of Lyon.

These differences came to a head once again this week, when Di Maio backed German politician Ursula von der Leyen as president of the EU Commission, while Salvini called for his party to reject her candidacy.

'No government is going to fall tomorrow'

Italy has had 61 governments since World War II, leaving the possibility of a coalition's collapse a very real threat in the minds of the public.

Seeking to assuage worries, Di Maio told Rai on Friday that the government's job was to "bring solutions to the citizens and not problems."

To that end, he said he was seeking to meet with Salvini that day to "clarify and move forward," and not to "issue an ultimatum."

Salvini also played down talk of a crisis on Thursday evening, writing on Twitter that "no government is going to fall tomorrow."