A fresh corruption scandal in Italy has heightened already simmering tensions within its fragile coalition government. The crisis comes as support for the far-right League has surged. 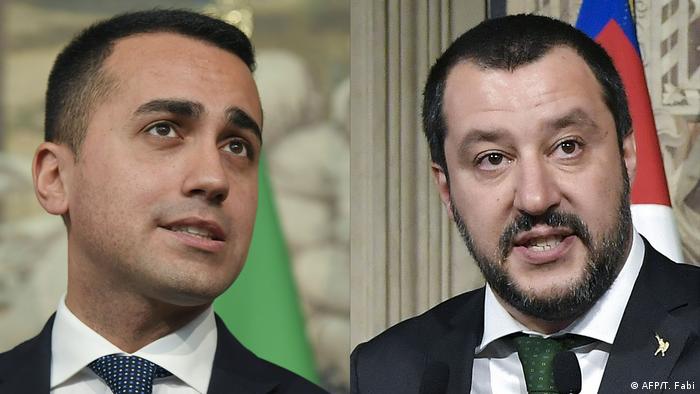 Italy's already fractious coalition government teetered further towards collapse on Friday over a corruption scandal involving a junior minister from the League.

The League and anti-establishment left-wing 5-Star Movement formed a coalition last June, but Italian media has speculated that the government could split amid mounting tensions between the two parties.

5-Star leader Luigi Di Maio accused his coalition partner on Friday of "threatening to bring down the government," a day after Armando Siri, a junior transport minister and economic adviser to League leader Matteo Salvini, was put under investigation for graft.

Siri has rejected allegations that he took €30,000 ($34,000) in bribes linked to the Sicilian mafia to help companies in the wind energy sector.

But in a decision that infuriated the League, 5-Star's Transport Minister Danilo Toninelli announced Siri would be stripped of his government responsibilities pending judicial proceedings.

Di Maio has called on Siri to resign for "for ethical and political reasons."

The League has expressed "full confidence" in the junior minister, and Salvini said Siri "should not resign."

5-Star has vowed to have zero tolerance for corruption, but its clean image has been bruised by graft allegations within its ranks.

"I say to our 5-Star friends they defended [Rome Mayor Virginia] Raggi when she was under investigation. Please do not apply double standards," Salvini said

Raggi remained in office last year despite being accused of abuse of power. The 5-Star mayor was later acquitted.

But in a fresh controversy, the L'Espresso weekly published audio of wiretaps this week in which the Rome mayor allegedly tells the former head of waste company AMA, Lorenzo Bagnacani, to tweak accounting books to receive public money.

Bagnacani said in a police complaint published by L'Espresso that he was fired after refusing Raggi's "undue pressure."

According to Italy's ANSA news agency, the Rome city council said in a statement on Thursday "there was never any pressure [on Bagnacani] but the simple application of the norms, the balance sheet proposed by Bagnacani broke the norms and would have guaranteed bonuses for the CEO and the managers."

The brewing scandal prompted League Minister for Regional Affairs Erika Stefani on Thursday to call for Raggi to resign if the conversations were genuine.

The audio recordings reveal "the confession of a serious crime and a clear admission of a flagrant inability to govern," Stefani said. "In line with the rules of her 5-Star Movement we expect her immediate resignation."

The League and 5-Star's alliance has been mediated by Prime Minister Giuseppe Conte, who is unaffiliated with either party but close to M5S.

Analysts say that Salvini may have an incentive to bring down the government after his party has surged in the polls and 5-Star shed support.

An opinion poll in March put 5-Star at 21%, down 11 points from its performance in the 2018 election. Support for the League has nearly doubled to 34% during this period.

It was a campaign pledge of Italian Interior Minister Matteo Salvini: The right to defend against intruders by any means necessary. Now, being able to grab a gun in self-defense is one step closer to reality. (07.03.2019)

An Italian party dispute over the EU-funded rail project linking Italy's Turin to the French city of Lyon threatened to bring down the government. The prime minister has now halted the launch of Italian tenders. (10.03.2019)