The ruling 5-Star Movement and League coalition are split over a multibillion-euro rail link with France. League supporters see the project as a source of jobs and growth, while the M5S has called it a waste of money. 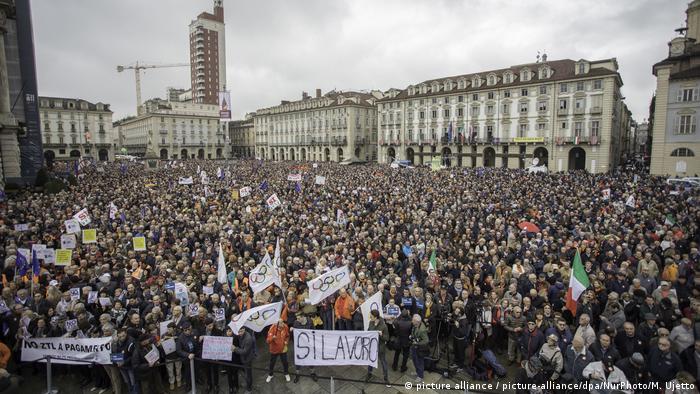 Around 30,000 people rallied in the northern Italian city of Turin on Saturday in support of a French-Italian rail link.

The 270-kilometer (167-mile) line, known as TAV, would link Turin with the French city of Lyon, cutting travel time from four to two hours.

In September, the city government, controlled by the anti-establishment 5-Star Movement (M5S), ordered a halt to the project against the wishes of the Piedmont regional government.

Luigi Di Maio, the deputy prime minister, M5S leader and industry minister, has opposed the rail link and called it a waste of money.

This position has put M5S at odds with the League, led by Interior Minister Matteo Salvini. The far-right League is particularly strong in northern Italy, the country's economic powerhouse.

Construction of the rail link has already started, but Di Maio has called for a renegotiation with France over the terms of the joint project, which is also financially backed by the EU.

TAV would include construction of a 57.5-kilometer tunnel between the Maurienne valley and Susa valley.